At the 2013 Good Beer Week, late into the evening at the Brooklyn Brewery Party at the Great Northern, the New York brewery’s GM Eric Ottaway said that if they could get their brewmaster to the 2014 festival, he loved to take on wine. Thus, a few months later, when Garrett Oliver’s attendance was confirmed, the thought process went a little like this…

“He’s the world’s leading expert on beer and food pairing so we should try to set up his beer versus wine event at the most high profile restaurant in Australia. Ummm… Let’s try Vue de Monde and, if that doesn’t come off, work from there.”

A call was made: “Hi, I’m calling on behalf of Good Beer Week as we’d love to run an event there. Can I speak to the events manager?”

Instead of a rebuff or a “What’s Good Beer Week?”, three days later the festival team was sat in the Lui Bar working out logistics for the event that was to become Brew vs Cru. Australia’s most expensive beer dinner sold out in two weeks – a month and a half before the festival – and Martin Spedding, owner of Mornington Peninsula’s Ten Minutes By Tractor winery, agreed to take up the challenge of representing wine against a man who had never lost in a battle of grain versus grape…

The Event:
In essence, it was simple: beer versus wine in a battle over five courses. In reality, there was an attention to detail on every level that went well beyond the simple.

Garrett Oliver, the Brewmaster at Brooklyn Brewery, author of beer and food pairing bible The Brewmaster’s Table, editor of the Oxford Companion to Beer and recently crowned Outstanding Wine, Beer or Spirits Professional in the James Beard Awards in the US (effectively the Nobel Peace Prize of the American culinary world) was representing the world of beer.

Bravely walking into the lion’s den to take on the previously undefeated champ was Martin Spedding, not just a winery owner but a keen scholar of wine and passionate advocate for Mornington Peninsula wines in particular, who had been recommended by Clare Burder of The Humble Tumbler as the winemaker most likely. Brave as not only was he taking on a formidable opponent but he was doing so in a room that was, in all likelihood, populated by some of the most avid beer lovers in Australia. 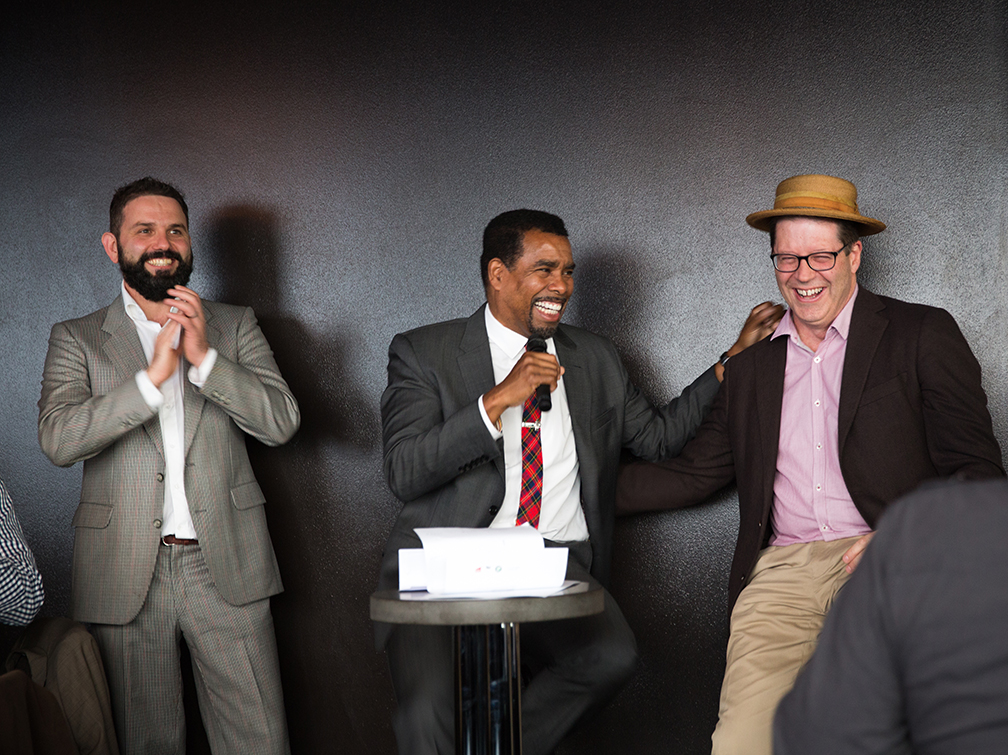 Following a pair of welcome drinks â a Brooklyn Ghost Bottle entitled Wild 1 (an aged, wild, strong Belgian ale flown in especially for the occasion as Garrett’s preferred option over the 25th Anniversary Lager originally lined up for the opener) and TMBT’s as yet unreleased 2010 Blanc de Blancs (bottled especially for the event) â the 96 guests sat down for five courses from the Vue de Monde kitchen, each paired with a beer and wine. Table captains were appointed to take the score from each table so that at the end we would be able to resolve once and for all which is king: beer or wine.

Before commencing the dining, Garrett and Martin introduced themselves and their respective businesses and, considering they had only met over lunch (admittedly a very long lunch) two days earlier, it was clear they had a great rapport. Both rose to the occasion in the spirit in which it was intended and would return to the microphones between each course to tell a little bit more about the particular drink and why it was chosen. During the courses, the conversation between the pair barely stopped and it appears a new friendship has been forged; before the results were announced, Garrett told me outside the room: “I love that guy!”

Without going into too much detail, it is fair to say that everything â absolutely everything â was amazing: the venue, the atmosphere, the food, the views, the service, the combatants, the beers and the wines. Martin and Garrett circled the room throughout, chatting to eager guests, before the time came to tally the scores and make the announcement.

Throughout the afternoon, making a choice for the best match with each course was not easy. In fact, in most cases it seemed that the vote would be accompanied by “But the enter losing drink here was amazing too.” 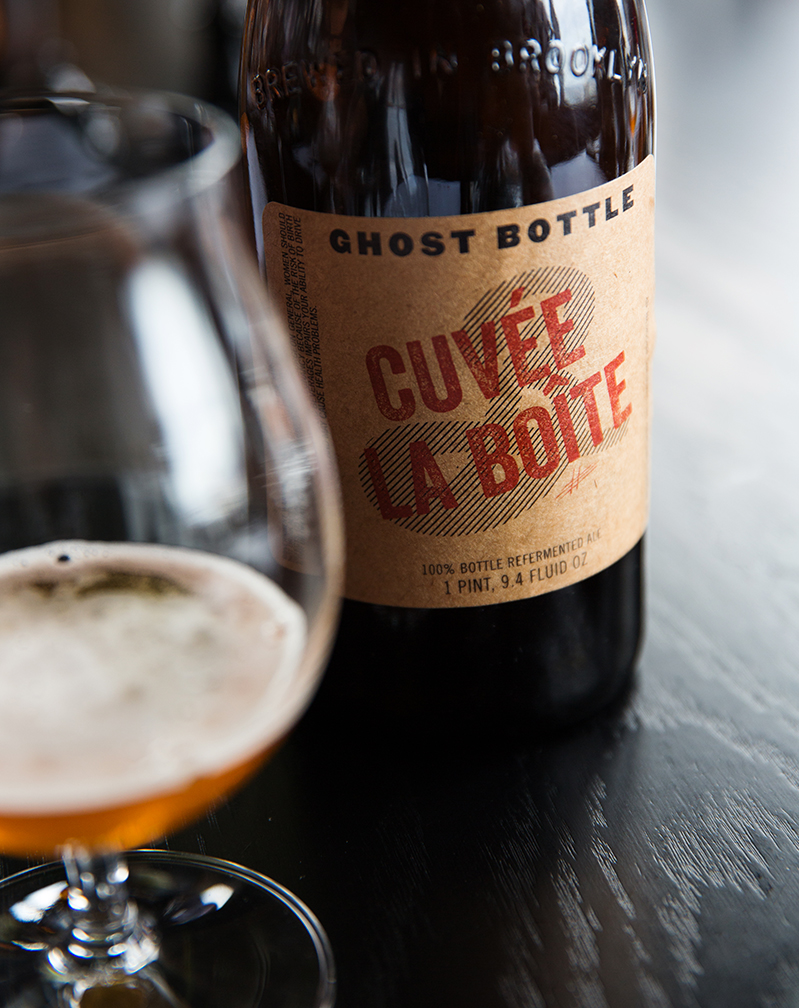 The beer behind the killer match

So when the votes were tallied there was little surprise at just how tight the result was. In fact, the Good Beer Week team feared it could be sending Garrett Oliver back to America having suffered his first defeat. The first course was drawn, as was the main and dessert. The cheese course went to beer 4.5 to 3.5 with one table having voted for a six â six draw.

In the end, beer won out thanks to one of the most incredible pairings we’ve ever sampled: Brooklyn’s Ghost Bottle Cuvee la Boite, which features a spice mix from New York’s leading spice expert at La Boite, with a dish of onions prepared three ways with bone marrow. As many people commented, these two elements that each had powerful yet distinctly different flavours came together as one in the mouth. It was as if they dissolved into each other and became a new, third entity. Some tables score it a resounding 12-0 to the beer, whereas most other courses were voted as draws or 7-5.

Martin admitted that even his wife had voted against him on one course, while Garrett admitted he had given his vote to wine with the last course and popped his boater on Martin’s head. The pair have already agreed to meet up in New York and Vue de Monde has been (heavily) pencilled in for the opening Saturday night of the 2015 festival so we can try to recreate the fun once more.

Killer Beers (and wines):
The Brooklyn team were astonished at the lengths the Ten Minutes by Tractor team had gone to with their wine selection. As well as bringing a welcome drink that won’t be available until later this year, for the dessert course Martin and his winemaker had specially prepared 12 bottles with a 30g dosage of sugar as they didn’t have anything otherwise suitable for the course.

“There are only 12 bottles,” Martin told me beforehand. “Nine are here for this event, two are back at winery and I drank the other one last night.” Garrett later noted it was sad that the winemakers – limited to their “one ingredient” – had resorted to “doping”.

He also pulled out an as yet unreleased young Pinot Noir, plus the 2009 Pinot Noir that had been awarded the same score by James Halliday as that year’s Hermitage Grange (97/100) and has been sold out for years, as well as a ten year old Chardonnay that, again, was sold out long ago. One can only imagine that many of the beer folks in attendance will be making a beeline to his winery soon.

As for the beers, it was limited editions and Ghost Bottles galore. The opening Wild 1 was spectacular, while rare drops such as Cuvee Noire and K is for Kriek, an aged cherry sour, were both intriguing and offered some amazing complements and contrasts to the impeccable food. 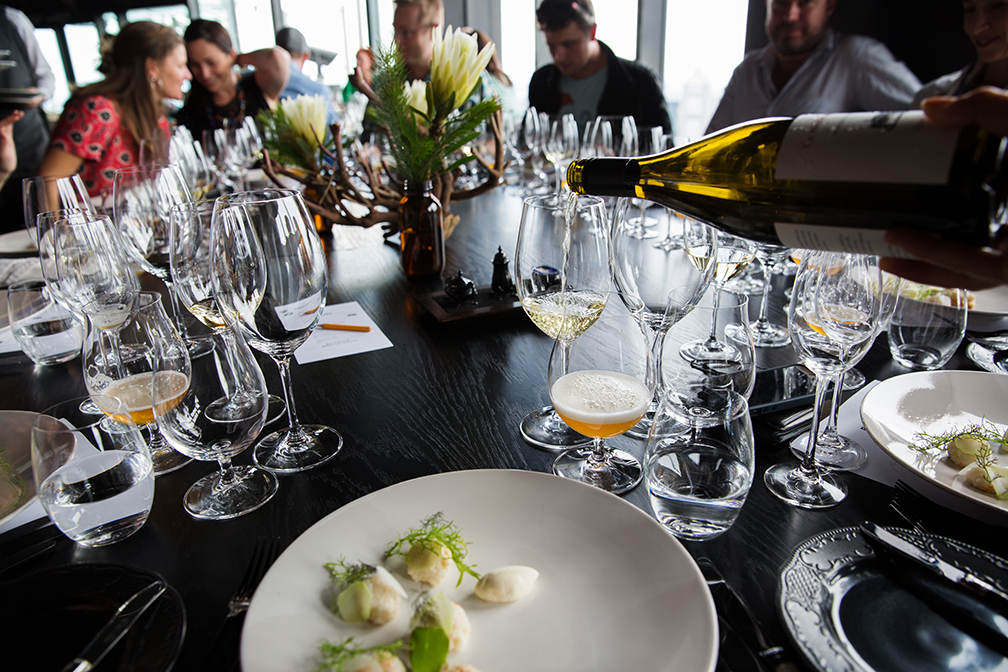 Good Beer Week taking over the most high profile – and wine-focused – restaurants in Australia and doing it with style just three years after the festival launched.

The clear joy that the two combatants took in the battle.

A succession of beers and wines that one would never otherwise be able to sample.

Garrett talking about why people like him and Martin get into making beer or wine. It will make you poor but, because you are doing it out of love, you can never fail.

Martin describing the experience of sampling beers he would never have tried before as “revelatory”.

Watching sunset from the viewing deck 55 floors up once lunch was finished.

The Event in Three Words:
Where to next?

Thanks to Jess Shaver for the photos.