Taking On The Taps

Taking On The Taps

Such is the rapid growth rate of craft beer today, it is enough of a challenge trying to stay up-to-date with every new Australian beer release, let alone the hundreds arriving from overseas. Thus, while many have considered trying to find a means of keeping eager beer lovers up-to-date with what is on tap at the country’s beer venues and breweries, it is a monumental task. Not only is there an avalanche of new beers – not to mention new breweries and new venues – but any such scheme relies on the ability and willingness of the said venues and breweries to maintain it.

There are social media-based approaches, most notably the Pouring In… Twitter accounts that began in Melbourne early last year. The concept has since spread to other cities and looks to keep people updated on what is pouring when and where via regular tweets and retweets. As of this month, there is also a “Pouring in…” Android app that allows venues or users to upload photos of venue tap lists and find listed venues by map.

Another Aussie-based tap list app first saw the light of day just before this year’s Good Beer Week, however. Now Tapped is the brainchild of a Melbourne web developer who also happens to be the brother of one of the Brewers at 7 Cent Brewing. It was launched for iOS and Android in May and to date has managed to sign up many of the country’s leading venues which, with varying degrees of success, are maintaining their own tap lists.

These can be viewed by drinkers online or via said app. What’s more, by hooking into the community-powered resource that is Untappd, creator Angus Bremner has set up a second form of tap list that attempts to calculate what is on tap at venues by looking at what beers are being “checked in” on Untappd by visitors to a venue.

“It started out of frustration at not having a single place where you can get tap lists that are up-to-date,” says Angus. “Currently you can trawl through Twitter, Facebook, venues' websites or their own apps but it is always difficult having to go through all of them. The idea was to create a central location for venues to maintain their tap list and for users to easily find what is on tap.

“There’s quite a lot of Twitter accounts that do a good job of re-tweeting what is on tap but there is also a world beyond Twitter.

“I’m a craft beer enthusiast myself and consulted with [brother and 7 Cent brewer] Doug who offered a lot of industry advice and was able to help with a lot of venues that they supply to.”

As such, working in evenings and at weekends over a six month period he created Now Tapped. Based on the simple, stripped down iOS 7 aesthetic, it offers users the chance to see what is currently on tap at a particular venue, search for a brewery to find out which of the venues in its database is pouring their beers, or view a map to see what venues are in the vicinity and what they have on tap. If a brewery, venue or beer has detailed information on Untappd, that can be viewed too.

“The only true way to get an accurate list is for venues to update it themselves,” he says. “But venues are often simply too busy to update [their lists] so I made a second app specifically for venues that is as easy to update as possible. [I figured] staff would always have a phone with them and, using the venue app, it just takes a matter of seconds to add or delete a beer.” 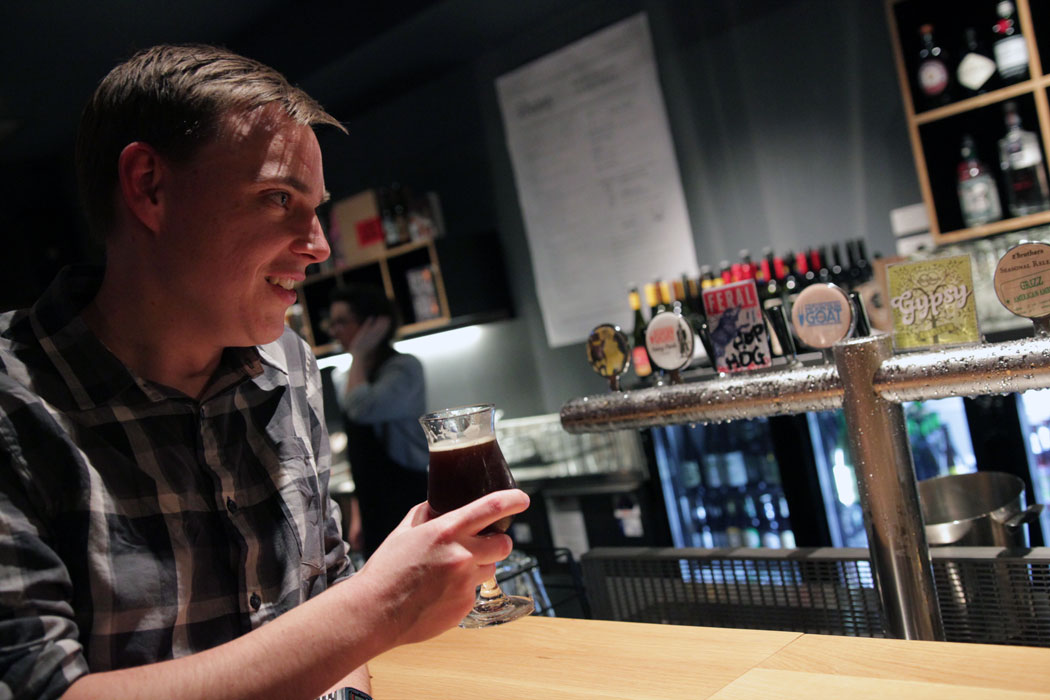 Angus doing what he does: drinking beer and checking out taps

On top of the venues who are using the site themselves, he created lists for other venues based on Untappd check-ins. This means there are two types of lists currently available on Now Tapped: “Official” ones that venues maintain and “Reported” lists that are generated from Untappd.

“Untappd has become extremely popular and has a wealth of information so I’m able to use their database of beers. Venues [maintaining "Official” lists] just search for the name of a beer and when it comes up they can add it and it’s instantly updated on our website and on the users' app."

While it remains in its infancy, already there have been several updates based on feedback from users and venues and there are plans for more too, such as the ability for beer geeks to check in their beers on Untappd without leaving the app.

One of the first venues to sign up was The Terminus. The Melbourne pub had previously been using the US-based site Taplister, but found few Aussies were using it.

“I think it’s great,” says bar manager Dave Langlands. “I think it has longevity. The potential of Now Tapped is that people are actually using it. It’s really easy to use for a venue – it takes literally ten seconds to update our list.

“From a user’s perspective, it’s all in one place. You can go into the app and see what’s on at various venues and you can search by brewery and see where their beers are pouring, which is great.

“The simplicity is the main thing that makes it so appealing. It’s not very detailed but has a lot of the information you need and ties it all together.”

“I’m already hearing about users pushing venues to get on board,” said Angus. “Feedback has been generally very positive. People have enjoyed using it.”

If you would like to add it to your phone, simply search for Now Tapped at the appropriate app store. Any venues wishing to jump on board can head to nowtapped.com/venues and sign up for an account, then download the venue app.