In a couple of weeks, copies of 150 Great Australian Beers – Your Guide To Craft Beer and Beyond will appear on shelves across Australia. It is written by the founder of The Crafty Pint, James Smith, a situation which posed a minor dilemma at Crafty Towers. Namely, when you spend your life writing about other things, what do you do when it comes to writing about yourself? So, we decided that the best approach was to hand the reins over to Crafty Pint NSW, Nick O, to carry out the interview…

Nick: I hear you’ve got a book due out about Australian beer. I occasionally write for an Australian-based beer website that’s focused on craft beer and I’m sure our readers would love to hear your thoughts about the upcoming release. If you could spare a few minutes out of your busy schedule, I’d like to pose the following questions to you:

Getting asked to write a book about beer seems like a pretty tough gig. How does one find themselves being presented with such an opportunity?
James: A couple of years back, a chap from Hardie Grant, which publishes the James Halliday’s Wine Companion Magazine that I write for, asked over pizza whether I’d ever considered writing a book. That planted the seed, a while later I pitched couple of concepts to their head of books, we agreed upon a way forward and, just before Christmas last year, I got the green light.

I’d always figured that launching The Crafty Pint could lead to spin-offs in the beer world and, along with opportunities such as becoming involved in Good Beer Week, the chance to write a book has proven that to be true.

There have already been plenty of books written about beer in Australia. What makes yours different?
It’s the most recent. It’s the only one with cover artwork inspired by Primal Scream’s epochal Screamadelica album. And it’s probably the only one to reference Fozzie Bear.

On a more serious note, I’d like to think that my travels of the past six years to, I’d imagine, more Australian microbreweries than anyone else on the planet means there is a broader representation of Australian breweries and beers than in any book of its ilk. And that, in keeping with my overriding mission of promoting good Australian beer to a broad audience, it is pitched at a level that is approachable and entertaining enough for newcomers to non-mainstream beer yet has enough to interest the hardcore beer geeks too. What’s more, it’s beautifully presented – really beautifully.

A decade ago you might have struggled to find 150 Australian beers but now there is more than that number of breweries. With the choice having never been so great, how do you go about whittling the list down to 150 beers?
Some of the practicalities surrounding the book helped with the whittling. The idea was that each of the 150 beers in the list should be available to anyone in Australia â even if they were only released in bottle once a year and had to be ordered direct from the brewery. Therefore, any one-offs or draught-only beers were excluded. Aside from that, on top of the beers I had already sampled, I tried to get my hands on as many bottles as possible to ensure as many breweries that had a beer worthy of entry (that I had tasted, obviously) were included.

There is a section at the end listing a number of breweries that don’t have any packaged beer that are worth checking out although even this approach means that there are some brewing companies who make some great beers, such as Grifter or Doctor’s Orders, who have neither bottle product nor a brewery at which you can visit them (yet), thus are only mentioned in passing. And, despite my best efforts over the past six years, there remain breweries still to be visited and a fair few who have appeared on the scene in the months since the list was compiled. That said, if the book doesn’t make you thirsty, inspired to check out more breweries, and excited for the present and future of Australian craft beer then I don’t know what will.

Beer drinkers can be fiercely loyal and generally not shy of an opinion. Are you concerned about the book’s feedback? For example, if you’ve left out someone’s favourite beer and they accuse you of being tasteless?
I fully expect there will be the occasional: “Why the hell is that beer in there?” but taste in beer, like any art form, is subjective. I once cracked an aged bottle of beer with friends at a barbecue that had spoiled so badly over the years it tasted like a combination of battery acid and cheap sherry. Two of the people at said barbecue thought it was fine. What’s more, debate is great anyway.

On that note, should we expect any controversial inclusions?
Define controversial. I guess Twitter will reveal allâ¦

Do you think the book has appeal beyond beer drinkers?
If by “beer drinkers” you mean the dedicated beer drinker, then that’s the plan. As my wife has pointed out, however, she’s unlikely to be buying a copy for her aunt…

As I said above, the aim has been to write it in a manner that is entertaining as much as informative. I’m still very much learning about beer â both the product and its incredible millennia-long history â so in many ways, outside of the 150 beer entries themselves, the other sections of the book are an attempt to pass on as much of what I have learnt to date to people in a way that will fast track them to a greater level of understanding of what beer is, why it is what it is, and why it matters. And hopefully they’ll enjoy the odd chuckle along the way at some of the stories and characters that make the contemporary Aussie beer scene such fun. If it inspires people to further reading, great. If it just makes them more adventurous on their next road trip or visit to the bar, then that’s a win too. 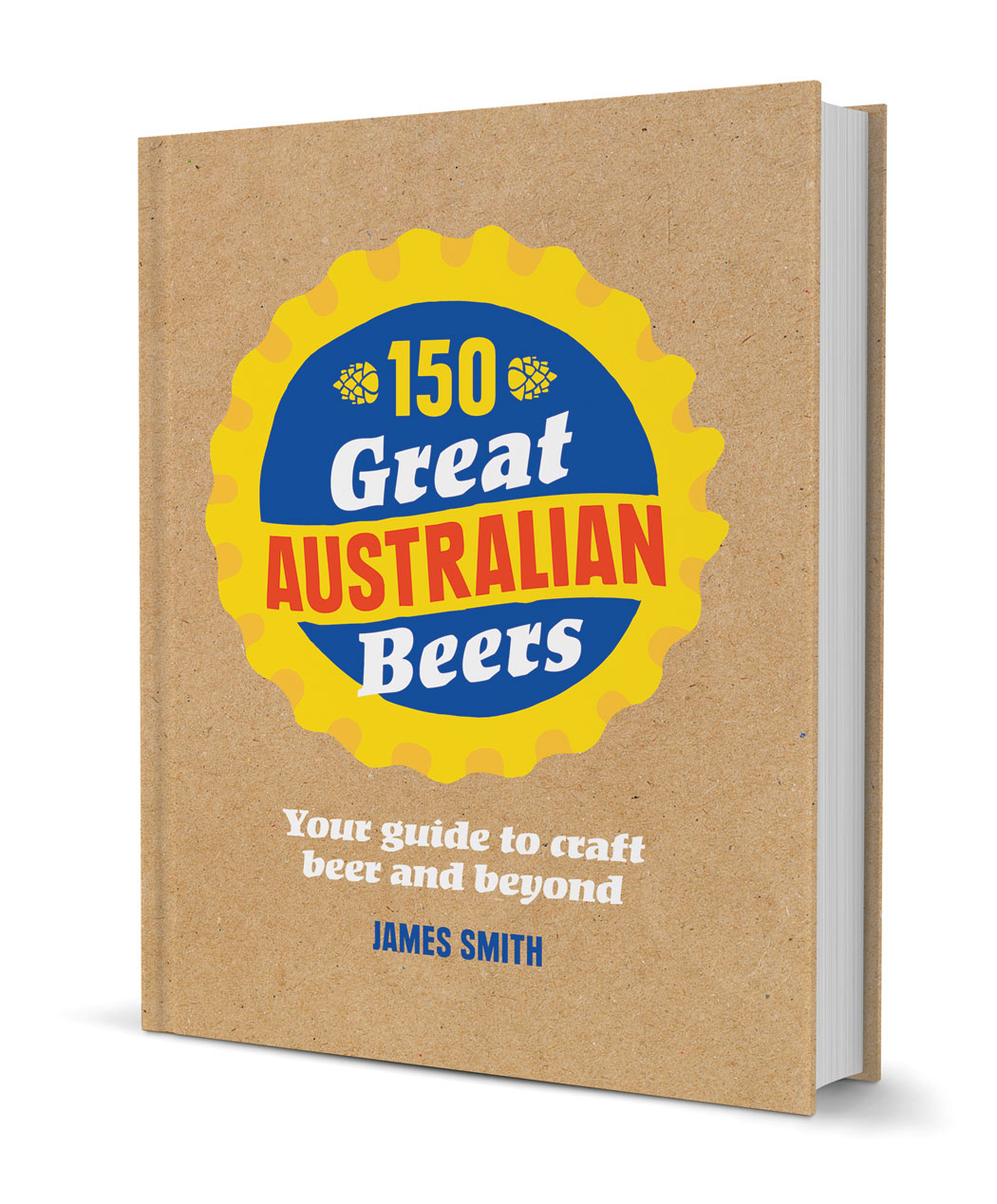 It’s being launched in time for Father’s Day as well so will hopefully land in the laps of the few non-beer drinking dads, pique their interest, and we’ll find them attending the headline Beer Geek events at next year’s Good Beer Week.

How many beers do you think it took to make this book?
God knows how many different Australian beers have been sampled since I ordered a Mountain Goat Hightail on my first full day as an Aussie resident in 2008; it was the only beer on a very short list at the restaurant I hadn’t heard of and I remember being amazed at its colour. “A dark beer in Australiaâ¦ Well I never!” If only I’d known then what lay aheadâ¦

That said, an equally appropriate question would be: “How many drugs do you think it took to make this book?” A fortnight after the book was commissioned, I suffered a herniated disc in my spine and spent the subsequent two months writing it in rather a lot of pain, lying flat for most of the day, and munching on various pain medications of increasing strength.

This had its benefits, not least in occasionally giving me what was effectively a fresh set of eyes when editing early drafts as there were a couple of occasions when I would read over my writing and have absolutely no recollection of writing the words on the screen. I guess, referring back to an earlier question, this may also make it unique among Australian beer books – the first written while under the influence of something other than beer! It does mean that, should this first run sell out, there are a couple of minor revisions required for the second edition. It will be fun seeing if any of the beer cognoscenti spot them… I also owe a massive thanks to editor Rihana Ries who kept assuring me everything was fine and no one was fretting at Hardie Grant when I missed deadlines as a result of said incapacitation – only to admit once it was done that there were plenty of people fretting but she’d sheltered me from the storm.

Lastly, when’s it out?
It will be on shelves in good bookshops nationwide from August 1 and is available for pre-order via Bookworld online here.

We’re also holding a very laid-back launch at Moon Dog Brewery on July 31 where there will be books for sale as well as a one-off beer on tap I’ve created with the guys there for the night. More details are in the events diary.