There is an American style India pale ale brewed in the heart of WAâs Swan Valley that took home the trophy for Champion Australian Beer at this year’s Australian International Beer Awards. By name itâs an animal, but itâs probably not the beast you think it is…

Mash Brewing, based in WA’s Swan Valley, took out the top beer trophy for Copy Cat, an American style IPA (AIPA) first brewed earlier this year as a draught-only release but now out in bottles too. Head brewer at Mash, Charlie Hodgson (above left at the brewpub), named the beer as a tongue in cheek reference to the proliferation of AIPA beers being released by craft brewers across the country.

“We thought we would play copy cat with the style and essentially turn our Pale into something big and brash and go to town with some of our favourite hops,” he says.

It is Charlieâs first stab at an AIPA and not too shabby for that, whether according to the AIBA judges or those hop-loving drinkers who have been lucky enough to try the beer. Normally someone who favours traditional English style beers – the ones with which he cut his teeth as a home brewer – Charlie found the buzz around heavily hopped pale ales hard to ignore and decided to challenge himself to create his own.

âI love designing and refining beers and get a huge amount of job satisfaction out of what I do here,â says Charlie of his two-and-a-half years at Mash, the brewery he joined after time spent at fellow WA brewery Gage Roads. Already a fan of Mash beers when he started – and the man the brewery’s owner had wanted to install as head brewer from day one before he opted for Gage â when he finally arrived at the brewery in West Swan Road, he felt it needed a little focus and began working at putting his own spin on the beers.

âWe are fairly traditional brewers with a subtle twist,“ he says. "We love to throw in old school raw materials like peat and rauch [smoked malts] and always have something with rye in it.â

The latest rye brew is a 4 percent ABV rye porter which Charlie describes as âa classic, subtle new age spin on a beer style that originated a couple of hundred years ago – without going nuts on it." 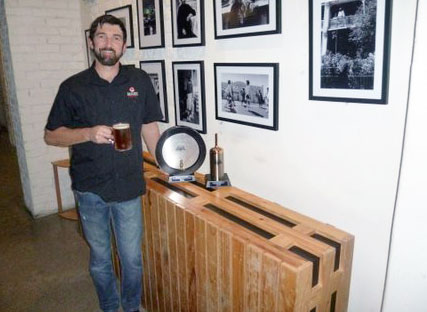 Charlie and his AIBA trophy haul

With the release of their new rye porter just around the corner and their Copy Cat AIPA unleashed in bottles it feels like Mash are about to make a little noise. It’s a noise that should be heard on a much wider scale than it would have been just a couple of years ago. After some earlier, less than successful, attempts to send beer across the Nullarbor to the east, Mash owner Brad Cox had been looking for a second brewery on the East Coast where the brewery’s beers could be brewed fresh for the country’s largest beer market.

When Melbourne’s 3 Ravens was put up for sale following a dispute between its owners, he stepped in, Mash became the new owners and the brewing team in Melbourne added some of Charlie’s recipes, such as the Challenger English IPA, to their schedule.

It’s a combination that has delivered results Brad could never have imagined. As well as Mash taking home the Champion Australian Beer, 3 Ravens took out Best British Ale and Champion Small Australian Brewery this year. The hook up means that Copy Cat isn’t just been brewed in greater volumes for the West Coast but is now being brewed, kegged and bottled at 3 Ravens for the rest of the country too.

âWe need to make hay whilst the sun shines and while our name and brand is in the spotlight,“ says Charlie, "and show the public how good and consistent all our beers are.

“Mash in my opinion is and has been a bit of a sleeper in the craft beer drinkers' opinions. Hopefully this will earn us some cred and we can show off what we can and have been doing week in and week out since the brewery opened in 2006.”

Mash Copy Cat is available at Cellarbrations at Carlisle, Mane Liquor, Aubin Grove Liquor and Cellarbrations at Willagee in WA already with more stockists to come and deliveries of the East Coast version (whose hops pretty much destroyed the filter at 3 Ravens) began to craft beer venues last week.