Handing Back The Baton

Handing Back The Baton

It's all change at Murray's, with the man who brewed the New South Wales brewery's very first beers when it first launched at the iconic Pub With No Beer returning to take up his old head brewer's role. Graeme Mahy returns from his native New Zealand, where he's been putting out beers under the 666 Brewing name and working as a brewing consultant in recent years, as the man who took over from him almost seven years ago moves on to pastures new.

Outgoing head brewer Shawn Sherlock, who began working with Graeme at the old brewery in Taylors Arms within months of it opening in 2006, has started work on a brewpub in the centre of Newcastle that he hopes to have open by March next year.

Brewery founder Murray Howe said in a statement announcing the return of his foundation brewer: “Graeme’s appointment comes at an exciting time for our company. Murray’s is experiencing a huge upturn in trade, with great support from the Australian consumer. Graeme’s international experience, combined with the great Australian heritage of Murray’s Craft Brewing Co, will see us doing some hugely exciting and innovative things over the coming years.”

Graeme (below right) has spent much time travelling the beer world, judging at competitions and working with brewers on their beers. He brings with him two decades of commercial brewing experience and, in his first spell at Murray's, created the original versions of much-loved beers such as Icon 2IPA, Grand Cru and Wild Thing.

He said: "In the interests of learning more about the quality and diversity of beer, I’ve been travelling throughout the USA, Canada, Germany, Belgium, UK, Singapore and Hong Kong. My experience in judging at World Beer Cups and Great American Beer Festivals in the USA in the past few years, combined with brewing collaborations with Pelican Brewery in Portland, and also Adroit Theory Brewing in Purceville, has given me a lot of ideas and new techniques which I will be introducing to Murray’s. It’s a hugely exciting time to be a craft brewer and I can’t wait to rejoin their great team."

The brewery he rejoins is a far cry from the one he left, having grown from its original base in the 50-person hamlet of Taylors Arms to one with a national reach. The man who has overseen the growth since Graeme departed was a homebrewer offered his first break in brewing by Graeme who is now establishing his own, long-desired brewpub.

Shawn joined Murray's less than a year after it launched – leaving a job at the University of Newcastle and moving his young family several hours away from their home – since when he has overseen the move to the current brewery site, introduced a wealth of innovative and highly-rated beers and recently worked on the commissioning of Murray's new, much larger brewery at its Bobs Farm site. Along the way, he has been named Brewer of the Year and, for many beer lovers, became the face of the brewery – and not just because it stares out from the labels of the Shawn's Fault India Black Ale.

"I was there for eight and a half years and have fantastic memories of the whole period," he says. "It was such a great opportunity for me when I started up there. With two young kids, it was a big step to take at the time and I was a very young brewer when Graeme offered me the chance because he needed some help. They took a punt on me and I took one on them, but we had some great times and brewed some really good beers out of there.

"I remember Willie Simpson saying it was something of a Field of Dreams mentality [opening the brewery in Taylor's Arms]. You had Mountain Goat, Holgate and a few others starting up [at that time] but this was a village of 50 people where, in a tiny pub, we were brewing a quite aggressively hopped pale ale as our flagship beer and then early versions of Icon and Grand Cru. They were really unusual beers to be brewing at that time."

He describes managing the move to Bobs Farm as "one of the most difficult things I've done", coordinating sets of tradies at both ends and moving the brewery lock, stock and barrel from one site to the other and getting it installed in "record time". Once up and running, the first beer brewed there was Whale Ale, so named because nearby Port Stephens is a famous whale-watching area. The beer – a highly hopped wheat beer – prove popular enough to help fund further brewery expansion as well as periods of unbridled creativity. 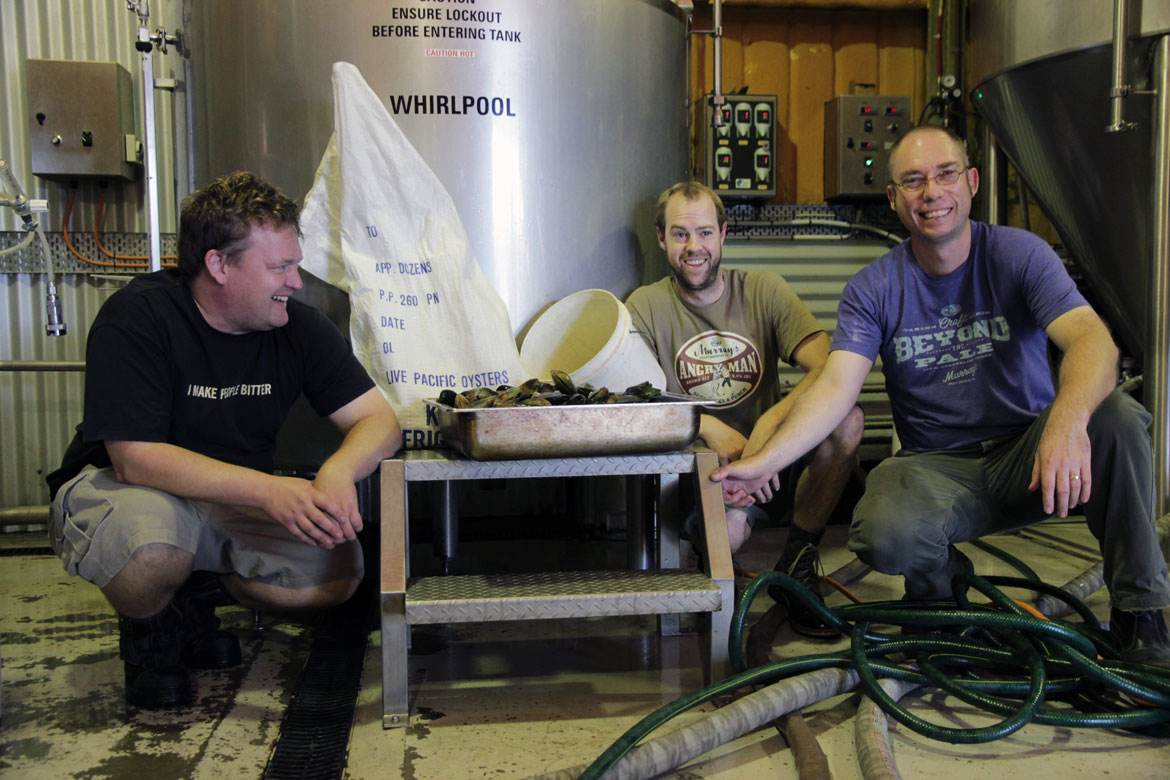 "After the first big upgrade [at Bobs Farm] we set sail from there. For 18 months, we released at least one new beer every month, if not two. For 18 months straight. There was a whole heap of ideas coming out," he says.

It was a period when Ian Watson, now head brewer at Fortitude / Noisy Minor in Queensland, was working alongside him and saw beers such as Spartacus, Punk Monk, Angry Man Brown Ale, Shawn's Fault and the run of imperial stouts – sometimes three in a month – that included Heart of Darkness and Seasons in the Abyss appear for the first time.

As for the future, Shawn (pictured right with his former brew team on the Auld Bulgin' Boysterous Bicep 2013 brew day) says: "I've been looking for a number of years to start my own small brewery. I love the brewpub model and the concept of rotating your own beer through your own taps. One of the things that I find hardest is maintaining freshness when your product goes across the country when we have just 20 million people in a country the size of the USA. People want to be able to walk into a bottleshop in WA and get Mountain Goat or Murray's and want it to taste exactly the same as when it was brewed. It's a real challenge with bottled products, one that Australia is rising to meet.

"A lot of us brewers are real control freaks at heart so want to know that our beers are in the condition we want. [In a brewpub setup] if it's not, you can pull it off or the punter can come and talk to you about it."

His venue in central Newcastle is a few months away but will have a capacity of 200-250 and an 18 hectolitre brewery – "Not huge but not small" – and will operate in a similar vein to Bentspoke in Canberra. Some beers will be served direct from tanks and there will be a cask ale range. Once he finds the time, there will be a barrel-ageing program too.

"Newcastle is such a great place for craft beer, with the likes of the Grain Store and Hop Factory," he says. "This will hopefully add to that.

"I hope we can make Newcastle the real centre for craft beer in Australia."

Here at The Crafty Pint, we look forward to catching up with Graeme once he's got his feet back under the table at Murray's.

We also want to wish Shawn the very best in his new venture. He's a true gent of the Australian beer industry, has been an invaluable source of information and guidance to us (he even proofed all the technical stuff in 150 Great Australian Beers) and is a good friend of the Crafty team too. Not only that, he allowed us to brew an imperial smoked Belgian mussel and oyster stout commercially. And made it taste great.