A few months back, it came (rather belatedly) to our notice that there was a growing number of beer podcasts cropping up around the country. While Radio Brews News, from the people behind the Brews News site, was well established, there were others operating in Melbourne, Sydney and Canberra.

We figured we should find out a little bit more about them all and run a short series of Q&As. Then time passed, as it always seems to do, and before we knew it we'd been invited back onto Radio Brews News and were due to make an appearance on Ale of a Time for their first anniversary show. So we figured it was time to get things moving, with the result here now in the shape of our first Podcast People article.

As well as notifying those of you who don't know about them of existing beer podcasts being recorded in Australia, they'll hopefully shine a light on the people and ethos behind them. First up, Melbourne-based Ale of a Time.

Who are the voices behind Ale of a Time?

Luke Robertson (below left): I started Ale of a Time about four years ago, as a blog, and have written for Brews News and The Crafty Pint. Originally from small town New Zealand, I've lived in Melbourne for almost 10 years working for a media company in all things operational and content creation/capture. I like making dumb statements about beer, the industry and people involved.

Dave Ellis (below right): In 2011, I was compelled enough by a beer to write about it and that started a blog (From Beer To Eternity) that has coughed and sputtered along since then and I have been a contributor to other sites including The Crafty Pint over the years. I tread water in spreadsheets during the day so I need to wax lyrical over a beer now and again to feel alive. Sometimes I like to be dramatic.

Emma Bemrose (below centre): Was roped into in by her boyfriend, Luke, because she may or may not have the access to a nice studio and she knows how to use it. As well as that she makes our guests amazing coffee [Can confirm – Crafty] and can detect a beer with diacetyl from 100 yards. Her real job is Lead Creative at Madman Entertainment.

We thought it would be a good way to get quality content out there to people interested in beer. There were a couple of other Australian beer ones already but because they were a bit irregular we decided to try and commit to doing something regularly that was slightly different to the others (mostly by including dumb jokes and sweet theme music).

Both. We'll bring in guests who we genuinely want to know about or try find out answers to questions we have.

On the other hand, we've both been involved in beer in some way for a while so we (hopefully) know enough to share our knowledge and make it relevant and useful for the listener.

Usually people we admire or respect in the beer scene. We have a bit of a list of wants, so we might approach them via email or through their distributors. Other times we just get chatting to someone at a bar or event and think they'd make a good guest. We try and grab a range of people to keep it fresh. 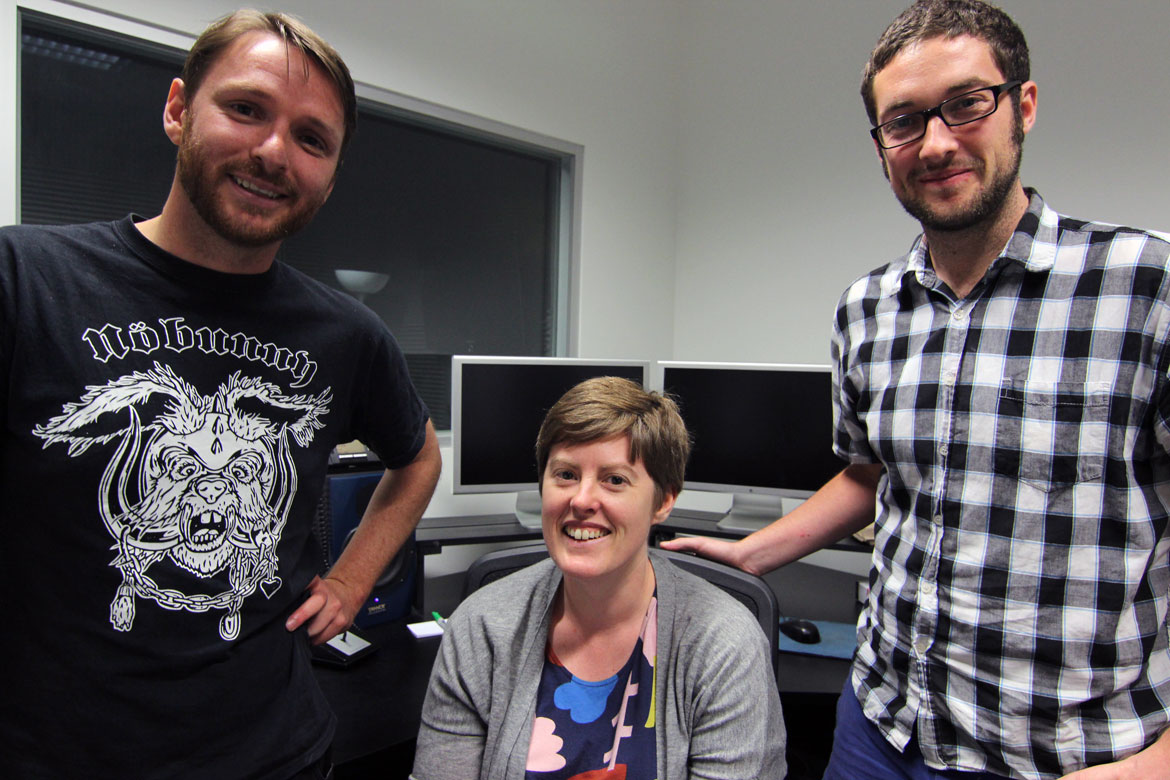 A little bit of prep. Generally we work out the cold opening (very loosely), make a list of news items and have some idea of what we want to discuss with our guest. We never have a list of questions though. It makes it more interesting to just get people talking and see where it goes.

Our beer/non-beer recommendations are sometimes decided weeks in advance, other times as we are speaking the words.

You'd probably have to ask them!

One of our standards is asking guests what they've learned over the years. It's always good to get wisdom of professionals.

Also, putting to Jos (Garage Project) that people had suggested they could be seen as a "gimmick" brewery was interesting too (not our thoughts, but it had come up a few times in the preceding days). It turns out no one had ever asked them that.

Jos' answer was passionate and insightful. I think we got a great look at what makes them the brewery they are ('sode 20). While they have clever marketing, they really put the effort in to both sides and I think it shows. It was a great response.

It's hard to go past having Hendo (Brewcult, 'sodes 8, 12 and 21) in the studio. It doesn't matter what the topic of conversation is, he always has a point of view that he gets behind passionately.

James from BrewDog would be a pretty great one. We've criticised them in past, but we also have a great deal of respect for what they do so it would hopefully make for some good debate. Also Jean Van Roy from Cantillon would be hard to top.

We do. Although not much. We really wanted to avoid a "beer geeks getting drunk" image.

We try and go for imperial stouts and barley wines. We both have too many in our cellar and they are great for sharing and drinking slowly. Also we get the occasional freebie so it's always good to have them on air and get honest opinions as we drink it, as well as getting a guests take on them.

We are fortunate enough to have access to a studio with high quality condenser microphones, Mackie 1642-VLZ Pro mixing board and Avid Pro Tools. We edit outside of the studio in Adobe Soundbooth.

For on location stuff we use a Zoom H4n portable recorder. To get four mics we've got Y Splitter cables and Peavey PV 100 mics. It's not the best set up (4 mics across two channels) but we didn't want to spend a fortune, so it serves a purpose.

Where can people find the Ale of a Time podcast?

Search for us in iTunes or your favourite podcasting app, or check us out here for full details on shows and streaming: http://aleofatime.com/category/podcast/

Other than Phil Cook's Beer Diary podcast, neither of us listen to any overseas beer podcasts. Non-beer, we both love Serial. Luke listens regularly to Jordan Jesse Go and Never Not Funny. Dave listens to Nick Di Paolo and Joe Rogan.

Strangely, all comedy/standup podcasts... I guess that's where we get inspiration for our brilliant cold openings.

Thanks to the Ale of a Time trio for taking part and having The Crafty Pint's founder on their anniversary show. If you'd like to know just how much he can witter on when no one is kicking his shins under a table or prodding him with a cattle prod then head here.

Next up in Podcast People: Matt and Pete from Radio Brews News

podcast people ale of a time Many beer sites, blogs and podcasts have come and gone since the first episode of Radio Brews News was recorded. As the team prepares to mark its 200th episode with a live special, we caught up with Brews News founder Matt Kirkegaard. read on