A few weeks back, we ran an article on the chap behind the rather splendid tap handles being rolled out by Melbourne's Moon Dog. When we posted the images online, one of the staff members at Canberra's Bentspoke Brewing Co was quick to post an image of the tap handles at the brewpub.

He did so with good reason too. While those created by Rain Gidley for Moon Dog are eye-catching in their colourful lunacy, the Bentspoke creations were eye-catching in their elegance and more subtle brand of intrigue. Predominantly made from wood and metal – in keeping with the industrial look of the brewpub – there are 18 of them adorning each of the main fonts at any one time, ranging from handles that look like they've been removed from bicycles to almost alien like creations borne of wood and bolts.

If their look is a far cry from the Moon Dog watermelon, monkey and pig, then their creator is also a far cry from Rain Gidley, the circus performer, roller derby coach and sculptor who works with the Melbourne mob. On a recent visit to Bentspoke, head brewer Richard Watkins pointed out a chap nursing a beer at a tall table near the upstairs bar.

"There's Peter, the guy that made our tap handles," he said. Upon mentioning the photo his bar manager had posted to Facebook, he added: "I'll introduce you."

It turns out that Peter Rogers, to give his full name, has quite a history with Richard. The retired cartographer was a regular at the brewer's previous haunt, the Wig & Pen, and ended up producing the always colourful, frequently cheeky, artwork for the brewery's many always colourful, frequently cheeky beers (Richard reckons he produced 165 different beers in his time there).

"He'd make new beers quicker than I could do the artwork," recalls Peter (below right).

Having retired from the map world, he'd turned to art and also taught himself the skill of wood turning.

"I've been retired for a long time," he says. "I got involved in wood turning as a hobby and did some cabinet making. I won a few minor prizes in local competitions."

Over time, he's gathered quite a collection of lathes, band saws and other machinery, as well as a solid collection of wood to work with, so when the idea of creating tap handles came up he took the chance, particularly as he was swapping the Wig & Pen for Bentspoke as his watering hole of choice. 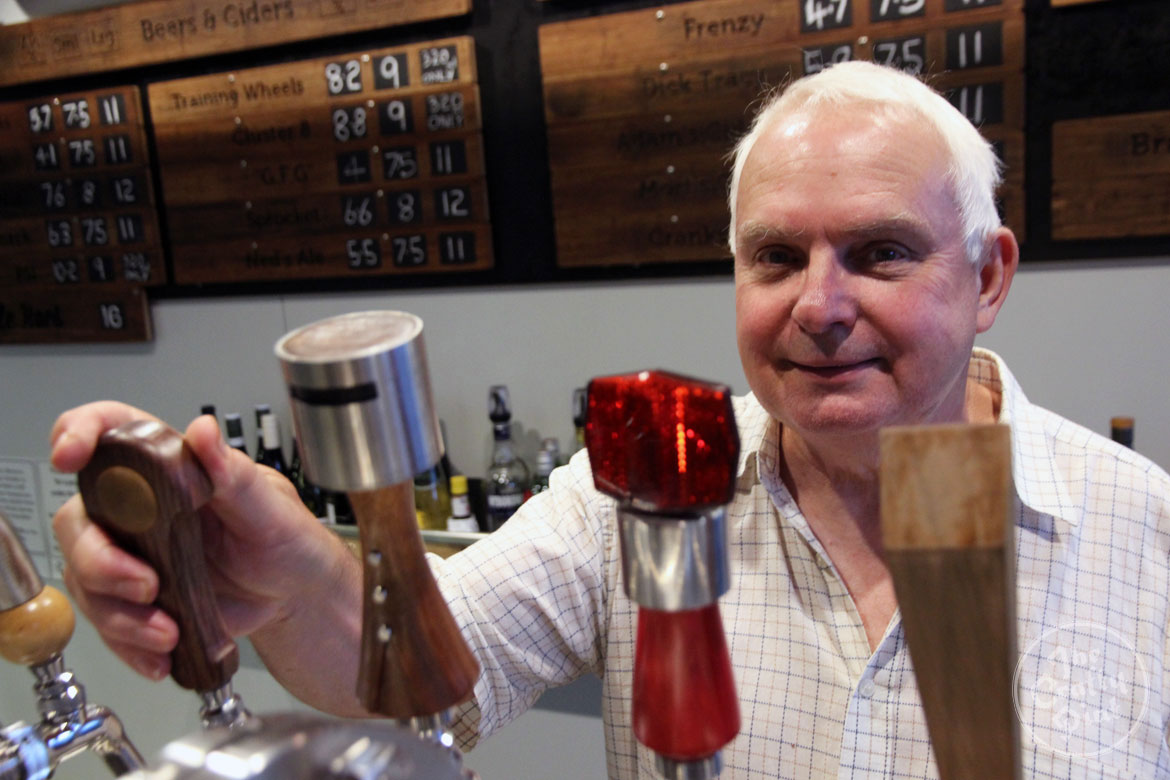 The handles currently lining the bars tend to have one of two geneses: Peter comes up with a design and Richard finds a beer to match or Richard has a name for a new beer and sets Peter to work.
They're turning over far quicker than expected too.

"We thought we wouldn't make as many beers," admits Richard, who, along with partner Tracy Margrain, has been astounded by the welcome afforded the venue by locals since it opened last year. They've ripped through far more beer and food than ever expected – even when offering up delicacies such as lamb's brains in crushed grain as specials (yes, we indulged...); on the Monday and Tuesday evenings that The CraftYy Pint was in town there was barely a spare seat in the house.

"It's just a bit of good fun," says Peter, who, a few years into pension-collecting age, views it as no more than a hobby and certainly not a service he plans to offer to others.

"We bounce ideas off the regular patrons. They'll say, 'Try this' and it's become a bit of a family thing.

"I try to keep things simple and in keeping with the wood and metal here. They are like little icons."

One of the most recent is perhaps the most eye-catching: the Ned Kelly that was created for the first beer in Bentspoke's Colonial Series. Working alongside historian David Hughes, Richard created a sparkling ale called Ned's Ale inspired by the beers that would have been popular in Ned Kelly's time for Australia Day. Future Colonial Series beers will follow, all with their own tap handle, of course.

"I can make three in a week," says Peter, no doubt hoping Richard's beer output doesn't increase beyond that.