One downside of the global craft beer explosion – and in particular of many brewers' love of cramming as many hops as possible into their brews – is the growing incidence of hop shortages. It's not that uncommon for brewers needing to tweak their recipes to cope with a lack of certain hops from the US, NZ or here in Australia. Or, indeed, for some beers that are utterly reliant on a particular hop to disappear for a while until the brewer can nab more from the following season's harvest.

The global nature of the contemporary beer world – and, often, a desire to release beers that are "new" or stand out from the crowd – also means that brewers are scouring every corner of the planet. So, just as Aussie brewers love to load up on the latest from the US or Europe, brewers from overseas like to pluck their share from the local harvest. Major players like California's Sierra Nevada, for example, buy large quantities of hops from Australia's Hop Products Australia (HPA) [but not, as originally stated, for their Southern Hemisphere Harvest Ale, which features only Kiwi hops], while the success of Stone & Wood's Pacific Ale means they require ever larger volumes of the Galaxy hop that it showcases so well.

All of which means there will be plenty of people welcoming today's announcement from HPA, Australia's largest hop grower, that they are expanding output by 50 percent over the next three years. They're pouring $15 million into operations in the Victorian High Country and Bushy Park in Tasmania.

"It's a fascinating period of time," says Owen "OJ" Johnston, the former Moo Brew head brewer now handling sales and marketing for the Tassie-based business. "It's the first time we've seen shortages of these varieties.

"We're actively seeking to avoid disappointing any customers by expanding. We're pedalling as fast as we can."

The major investment includes the purchase of new land, improvement of picking and kilning infrastructures and the development of new plant propagation facilities at both Rostrevor Hop Gardens in Eurobin, north Victoria, and Bushy Park, which is celebrating its 150th continuous harvest this month. 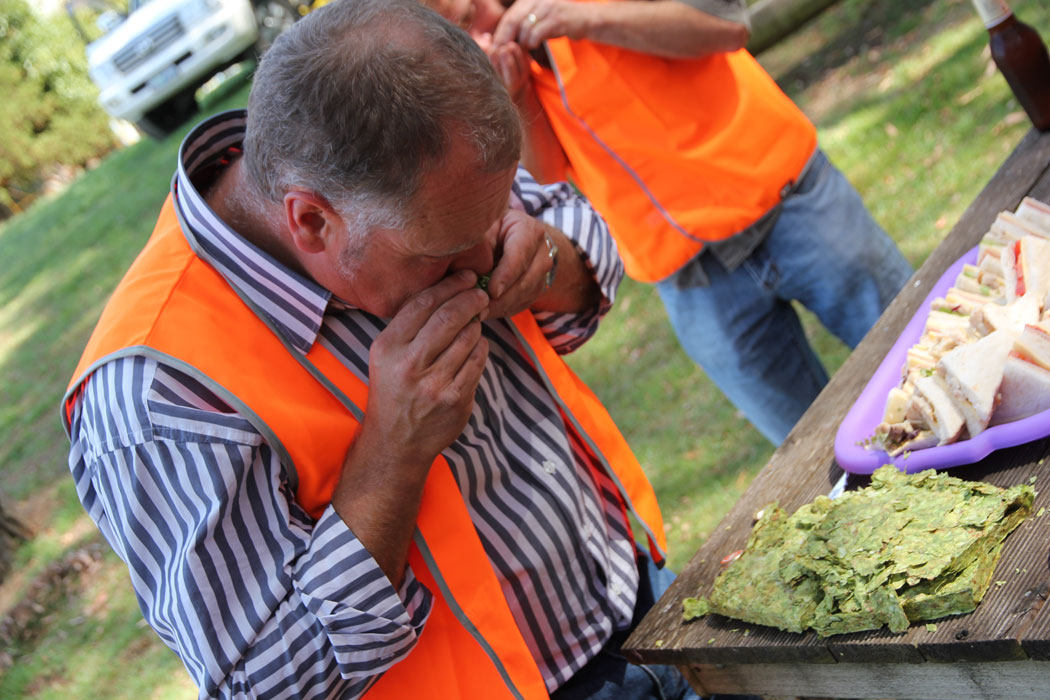 HPA managing director Tim Lord (pictured right during a past harvest) says: "Our farms are amongst the oldest continuously operating hop farms in the world – dedicated to hop growing since the late 1800s. We are investing to help satisfy the demand for our proprietary hops, such as Galaxy, Ella and Vic Secret, to ensure breweries in Australia and around the world can continue to make craft beer full of Australian hop character.

"HPA is a good news story in Australian agriculture; in the past decade we've transitioned from competing internationally at the mercy of a commodity based industry to thriving with a differentiated product offering through our proprietary hop varieties."

The company's first significant capital investment in land, plant and equipment in 20 years will see the area under hops increase by 50 percent and will double the processing capacity of Rostrevor Hop Gardens (pictured below). OJ says some machinery at their Victorian farm is 60 years old, often requiring the manufacture of custom parts if there's a breakdown, something that poses a risk should anything serious occur during the time sensitive harvest. 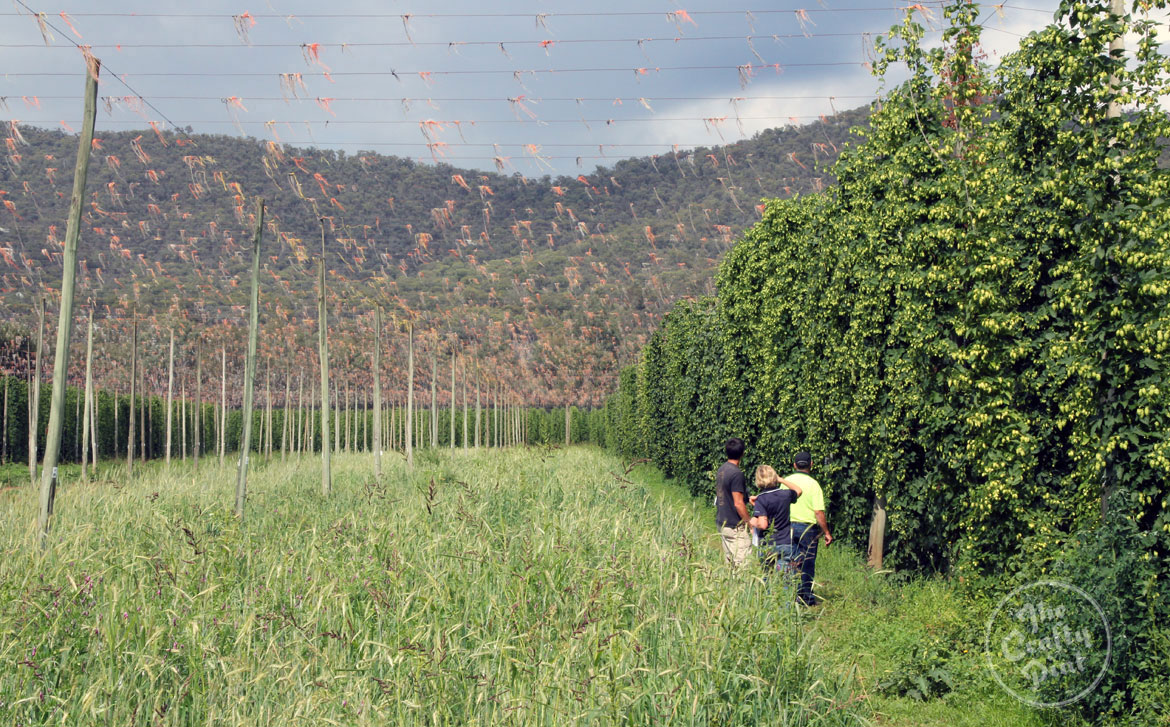 The comprehensive expansion will occur in a number of stages across both farm sites with the first custom picking machine due in Victoria in mid-2015. They are planting on land at both ends of Rostrevor and have added additional land adjacent to a grower they already work with in the King Valley. HPA is in ongoing discussions with the Victorian government to support delivery of the project in full, which would generate a significant number of additional jobs in the Alpine Shire.

The expansion will see the company's move from a producer of mainstream bittering hops, which was its core business until the last decade, towards creating "proprietary" varieties cultivated for their distinct aromas and flavours continue. In recognition of the changing face of the beer scene, HPA has been steadily switching from Old to New School and currently around 80 percent of its production is proprietary hops; this will increase to 90 percent by 2016.

"We don't want to go 100 percent [proprietary]," says OJ. "We still see ourselves as custodians of 150 years of Australian hop growing history."

With much preparatory work having already taken place on the new land, provided they plant before Spring there should be a first harvest in 2016. That said, even when the expansion is complete, Australia will remain a relatively small player on the global stage.

"It's little bit ambitious to assume we will ever be more than one percent of the world's hop production. In that sense, the brand awareness of a hop like Galaxy will exceed our ability to supply it," says OJ, likening the situation to that of hugely popular NZ hop Nelson Sauvin. "We will continue to grow the farm and grow as much as we can but we are never in danger of becoming a major hop [producer] as it's such a small growing region."

What HPA has proved in recent times is that it's an innovative grower with six new varieties launched in six years, including the all-conquering Galaxy, Ella (originally called Stella), Vic Secret, Summer, Helga and, most recently, Enigma, which was rushed from development stage to commercial release faster than any hop in the company's history. 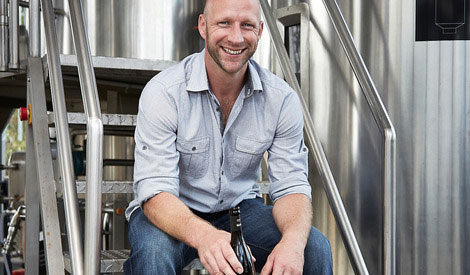 "Enigma is getting a really good reception with brewers," says OJ (pictured right) of their latest release, which is proving a quite multi-faceted variety, softer and broader in character than some of the other big hitters to come from HPA.

"A brewer the other day summed it up: they don't necessarily want every hop to leap out and slap you in the face. They need complexity and texture and subtlety because not every beer is a double IPA."

As for his switch from a customer of HPA's when at Moo Brew to their main point of contact for local brewers, with whom he works to advise on hop usage in their beers (and whatever else the conversation turns to), he says: "Working for a farm is just fascinating.

"I'm just coming to appreciate the big impact that the agriculture cycle can have on a business."

It's crunch time in that cycle now, with hops being harvested by home brewers, microbreweries and major growers across Australia as you read this. It means you can expect a wealth of fresh hop, wet hop and new harvest beers coming your way soon (watch this space). And, in years to come, even more of them featuring locally grown Aussie hops.