Before the month is out, the first beer brewed at Victoria’s newest microbrewery will be poured as the patience of brother and sister team Matt and Sharon Bradshaw finally pays off. More than eight years after they bought the former general store and garage in Forrest, midway between Colac and Apollo Bay on the Great Ocean Road, their brewery and cafe will be fully operational. The bar’s been pouring beer from fellow Victorian breweries Red Duck, Flying Horse and Beacon since late last year – plus their own Forrest APA brewed at Scottish Chiefs in Geelong in time for Christmas – but the next APA will be the first produced on the 600l system they picked up from Three Degrees in Melbourne.

“We bought the derelict general store and garage that had been closed for 12 years in 2002 and set about renovating it,” says Matt, a home brewer since 17 who studied brewing at Ballarat University four years ago. “It’s been a slow business putting it back together but we decided to open the front of house last year on Melbourne Cup weekend and have been flat out getting the brewhouse together.”

The arrival of Forrest Brewing continues the growth of microbreweries in Victoria’s west and southwest, with Beacon Brewing, based at Geelong’s Scottish Chiefs opening last year to complement the established breweries of Red Duck (Camperdown), Otway Estate and Flying Horse (Warrnambool). And, in keeping with many of the country’s smaller breweries, it’s been a family and friends affair.

“We’ve done a lot of the work ourselves,” says Matt, “with a lot of help from our friends and neighbours. We’ve got four taps and the plan is to have a variety of our own beers and some from other people that we like. We plan to have our own bottled product for people to take away within six months.” 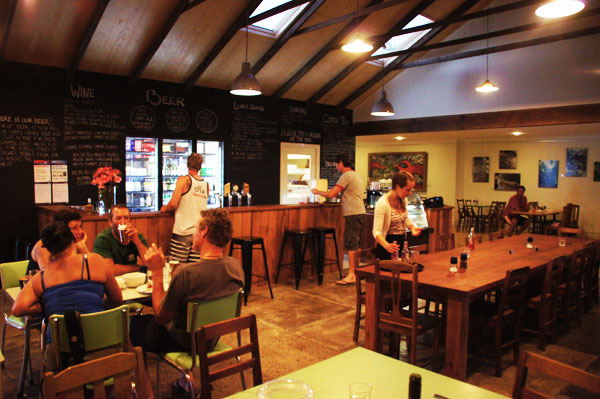 The brewery also features a cafe that’s open seven days a week through the summer holidays (9am to late), after which it will cut back to five days. There are usually half a dozen mains on offer plus bar snacks and beer-orientated food. It’s around half an hour’s drive inland from the Great Ocean Road on a hillside surrounded by bushland and one of the country’s premier mountain bike trail sites.

You’ll find Forrest Brewery and Cafe on Apollo Bay Road, in Forrest, and can get hold of them on (03) 5236 6170 or at info@forrestbrewing.com.au.