The trophy-winning team from Blackman's Brewery aren't the sorts to rest on their laurels. In the second half of 2019, they looked to cement their position as one of leading brewers on the Victorian Surf Coast with the opening of what was then their third venue: the Blackman's Brewery and Burger Bar in Ocean Grove.

Located just 25 minutes from their original brewpub in the popular coastal town on the Bellarine Peninsula, it features 12 rotating taps of their core range and seasonals alongside an epic burger (and other very beer-friendly dishes such as wings and mac and cheese bites) menu to match.

Bright and breezy, it sits in prime position in The Terrace – Ocean Grove's main strip – in one of the town's most historic buildings: the corner store that serviced visitors for well over 100 years before the Blackmans moved in.

It does just what it promises too – burgers and beers – with guests able to pull up a tall bench seat with mates (and their dogs) on the pavement outside, or pick from a selection of long wooden tables, booths and window spots ideal for people-watching outside. The venue is decorated with familiarly cheeky Blackman's flourishes too: the "Drink Brilliant Beer" neon sign over the white-tiled bar and the mural of the brewing process decorating the opposite wall.

Always pouring is a new beer created especially for the town – the OG XPA – an Xtra Pale Ale as sessionable as you'd want when on the coast, especially during the summer season when the Bellarine Peninsula swells with tens of thousands of holidaymakers.

Tasting paddles are available, as are the full range of Blackman's beers in cans (and bottles in the case of some special releases), plus everything they release under The Barrel Farm banner and their Coast hard seltzers.

Since its arrival on the coast, Blackman's have opened another brewery venue in the Geelong suburb of Grovedale – with the venue a replacement for the Good Beer Bar they once operated in the heart of the city – as they continue on their merry way as one of Australia's best and loveliest breweries. 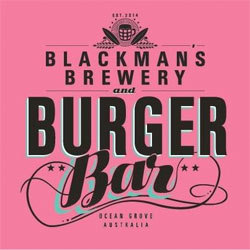