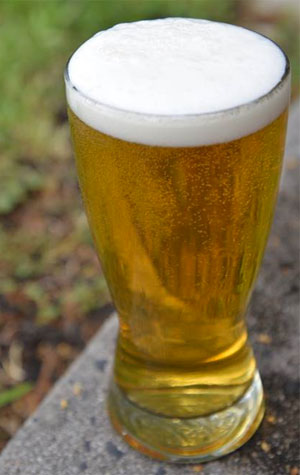 As the seasons change and the Oktoberfests take hold, it’s time for Aussie brewers to turn their hands to brewing German style beers. For the most part, that means concocting a Marzen / Oktoberfestbier style maltier lager. At Hargreaves Hill, they’ve opted instead for a Maibock, essentially a stronger (and frequently hoppier) version of the delicate Munich helles lagers. They’ve brewed one before – in collaboration with Red Hill for a very early GABS – and this time have brewed with all European malts and European noble hops (in other words, some of the oldest, most delicate hop varieties in the world from which many newer varieties are derived) and fermented the beer with German lager yeast. Completing the traditional approach, the beer has been granted an extensive period of cold-conditioning (or lagering) in the fermentation cellar to make the Maibock as classic an interpretation as possible.

The ever-eloquent brewer Kai Dambergs says to look out for “fresh bread crust and sweet biscuit, cloaked in a flourish of perfumed hop aroma from generous late kettle use of German Hallertau.” What’s more, he adds: “A surreptitious bitterness emerges as gentle counterpoint, encouraging a pleasant touch of dryness to the finish.” A career commentating on ballet surely awaits if brewing doesn’t pan out for him.