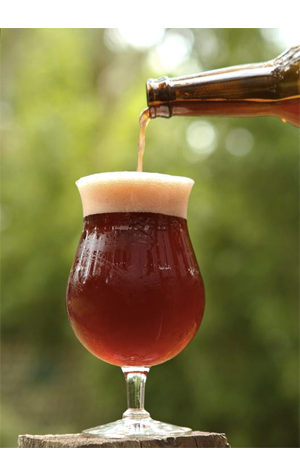 Last time we called into the Hargreaves Hill brewery to prepare a feature on their 10th anniversary, the brewers were rather keen to pour a sample from one of the fermenters. As soon as beer hit glass it was clear that what lay inside was quite different to anything else to have come from the brewery before as a waft of lactic sourness hit the nose.

That beer has gone on to become the Cherry Harvest Sour, Hargreaves' first sour and one that has again led head brewer Kai Dambergs to reach into his mental thesaurus. The beer started out with a sour mash (where the wort (grains infused in water to create a sweet liquid) is left for an extended period to allow natural "sour" acids develop) before having fruit added for a second fermentation. The wort in question is the second, weaker stream run off from the brewery's recent batch of Phoenix imperial red, making it something of a sister beer to the recently released beast.

Kai says to look our for such things as "creamy, soft aromas" that "yield to a long steely acidity" as well as "a florid hue and a cheeky pink head" and "minimal hop bitterness". He tells us the "cherry character incorporates smoothly with a dry, vinous nature, remaining distinctive while harmonising with the underlying malt profile." So there you go!