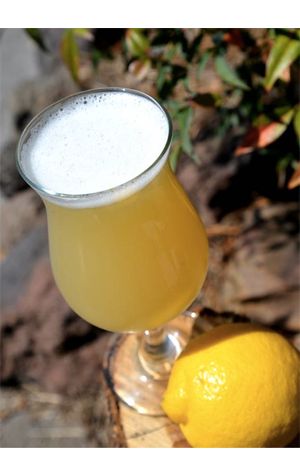 Maybe there's good reason we have a soft spot for Hargreaves Hill head brewer Kai Damberg's loquacious tasting notes. Having had a taste of this beer when it made a pre-launch appearance at The Alehouse Project for Craft Beer Rising, we sent an email to the brewery's rep asking for more info so we could post this listing. In said email, we described the beer as "spritzy", a word that, according to proper dictionaries at least, doesn't exist. Through came the tasting notes: "A light, spritzy..." Fools seldom differ, as they say.

Anyway, meandering asides aside, the beer is the second sour beer from the Yarra Valley brewery, coming hot on the heels of their Harvest Sour. This is based on the Berliner Weisse style, ie with a mash that's left to sour overnight deliberately. To this one was added fruity hops in the form of Citra from the US and new Aussie variety Enigma, which added to the lemon like acidity of the base beer. According to Kai, what was added included "a hint of ripe green peppercorns and ephemeral red berry aromas", neither of which, we must admit, were mentioned in our email.

It's a very cloudy to the point of looking something like a pale yellow Bellini, what with its fluffy white head, and is the sort of light, tart and, yes, spritzy refresher you can knock back on the remaining hot days of the year without fear of getting wobbly.