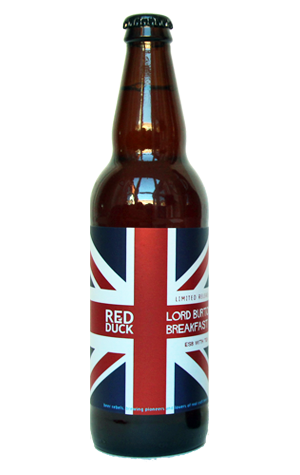 Last year, we caught up with Red Duck main man Scott Wilson-Browne for a chat about his ten years in brewing. One of Australia's genuine envelope pushers, responsible for a multitude of unique and often historically minded beers – more than 100 different releases at the time – he said he was considering reining in his wilder urges and brewing less types of beer. Admittedly, he'd brought half a dozen new beers with him at the time...

A few months on and it's safe to say he's finding those urges tough to tame. There's not only a run of new beers out but he's also given the entire range a brand new look. Among the new one-offs is a twist on a past occasional release. Burton was Scott's take on stronger English bitters, or ESBs. This time around, it's Lord Burton's Breakfast, so called because it features tea – both Prince of Wales and English Breakfast – as well as water from Daylesford & Hepburn Springs Mineral Springs Co.

The outcome is something that's a little floral, earthy and marmaladey with slightly sweet, biscuity English malts – Nice biscuits soaked in hot tea perhaps? – to the fore and a gentle bitterness. It's also a beer that, at 6.4 percent ABV, is perhaps best kept for a late breakfast.