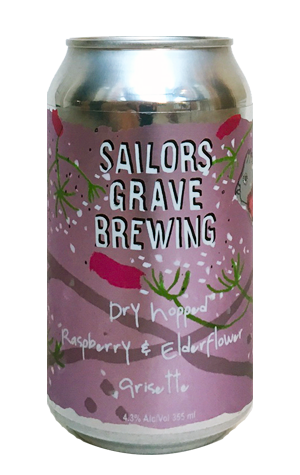 Serendipity is a fine thing. Such as when a brewer rocks up to drop off some beer samples in cans when you're packing for a music festival to which you're allowed to take cans. When it turns out the beer is not only practical but the sort that could easily slip into the "breakfast beer" category – and what are music festivals like Golden Plains if not the sort of place where a breakfast beer, or at least early lunch beer, is not just acceptable but pretty much de rigeur? – then the serendipity ratchets up a notch or three.

The beer in question is Sailors Grave's latest, the Orbost brewer's second grisette (a farmhouse style beer with origins in the same part of the world as saison) and quite possibly its least beery can design yet (which is saying something). This one comes with a pair of illustrated galahs on a soft pink background, the reason being that the beer inside also comes with a pinky, peachy Bellini like haze underneath its fluffy head. The colour is courtesy of the Picnic Point Farm raspberries within that are joined by elderflowers and new German hop variety Hallertau Blanc, known for its floral and fruity characters.

Berries dominate upfront, creating something akin to summer berry mousse aromas and flavours, albeit with no mousse like creaminess; instead, there's a refreshing, building dryness. A touch of spice and some yeasty, malty sweetness complete the picture, although it's really the berry character that carries it. Right up there with the best beers to come out of this exciting new brewery, whatever time of the day you crack one open.

NB If you're reading this in March 2017, this beer and five others from Sailors Grave, make up the mixed cases we're giving away to Crafty Cabal members in our monthly draw.