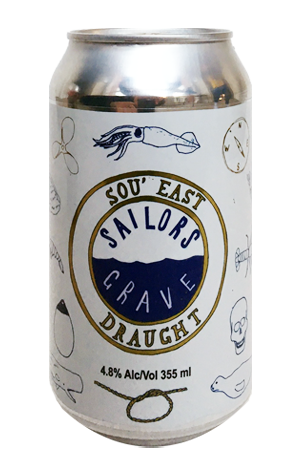 Sailors Grave does have supporters in its local region in the far east of Victoria – even some that drink its beers as well as those that appreciate the arrival of a quirky new business making use of East Gippsland's abundant produce. But there are plenty more for whom the thought of a raspberry grisette or seaweed gose is, as things stand, about as appealing a thought as a punch in the face. All in good time...

So the Moores decided to create a beer with their local pubs and clubs in mind: the Sou' East Draught. Out go the exotic ingredients. Goodbye, funky yeasts. See ya later, out there can design (replaced by something more like the sort of educational poster you might find at a regional maritime museum). Instead it's hello to a straightforward mix of water, malt, hops and yeast.

Sou' East isn't aimed at those who've fallen for the brewery's idiosyncratic charms to date, but those who wonder why they hell you'd mess with the formula that served Aussie drinkers just fine for decades. So what's it like? Beer.