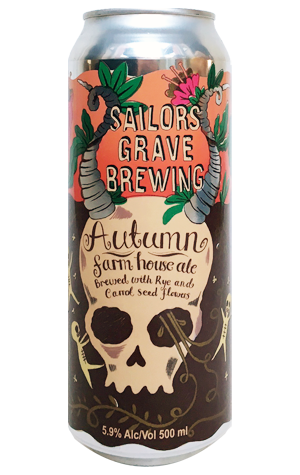 As part of their pre-opening research, the couple behind Sailors Grave took their young kids on a tour of the States, calling in on many breweries, particularly those in regional areas not dissimilar to their Orbost home in East Gippsland. Among them was Jester King and, while it will likely take years and no little skill to develop cultures and complexities akin to those of the Texan maestros, you can already see influences in the beers released by Chris and Gab Moore, not least in their desire to showcase unlikely local ingredients.

For their first tallboy tinny release, you can also see echoes of Jester King's stylings in the artwork; the Autumn Farmhouse Ale is the first release to use something other than illustrations by their Cornish illustrator, instead featuring the work of an Australian friend of theirs that straddles cartoon like and demonic in equal measure.

As for what's inside, it's another farmhouse ale – one reminiscent in some ways, in particular its fulsome body, of their Grapefruit & Marigold Saison – with added rye and carrot seed flowers. You'll find floral, spicy and sweet honey malt aromas, with the deeper rye character coming through more to taste before a spicy, peppery, drying finish comes riding along your mid palate, leaving something floral and perfumey in its wake. As for which of the above characters the carrot seed flowers are responsible for... No idea!

And good beer retailers in Victoria, Sydney and WA