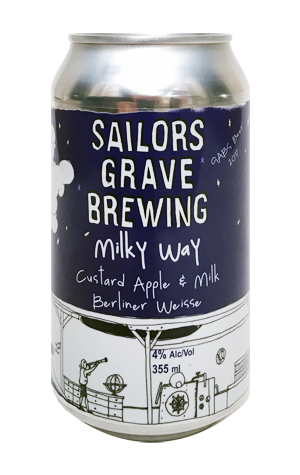 There's still some way to go before East Gippsland brewery Sailors Grave turns one, yet already they've turned out quite the collection of Berliner Weisse beers. There's been a couple of dry-hopped affairs (one with mandarins, one with blueberries), a whisky sour and, now, one starring custard apples from the Glasshouse Mountains, lactose (milk sugar) and vanilla beans and soured with yoghurt. Milky Way was their submission for the GABS 2017 festival beer lineup and is a homage to the Japanese fermented milk drink Calpis.

It pours a cloudy and very pale yellow, with aromas dominated by bright apples and a lemony acidity from the souring bacteria. We detect the impact of the lactose and vanilla more to taste, where they add a lingering character not dissimilar to Yakult alongside a bracing, apple-flecked acidity. Quite where Sailors Grave heads next (other than into the farms and gardens of everyone they meet in East Gippsland, it seems) remains to be seen. But they're quickly carving out one of the most fascinating stories in the beer world – no mean feat in such a crowded and noisy marketplace.