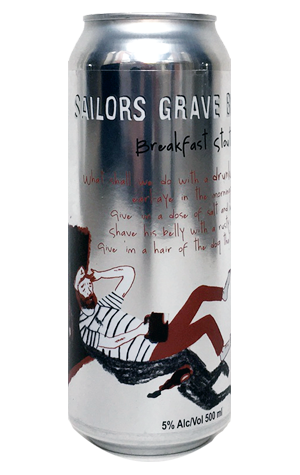 With hindsight, it was surely only a matter of time before Sailors Grave was going to address the issue of the drunken sailor. The brewery's name and nautical stylings almost demand it and their reimagining of traditional children's book illustrations throughout their branding seems a good fit for bringing an old folk tune to life. So here is Breakfast Stout, complete with drunken sailor lolling on the can and a snippet of the lyrics explaining how such a beer can offer him the much needed "hair of the dog that bit him".

To give the stout a "breakfast" bent, they added plenty to the mix: oats, cinnamon, vanilla and Ethiopian Sidamo Werka coffee beans roasted specially for them by Genovese. Quite where the ageing in Lark Distillery whisky barrels fits into breakfast, we're not so sure, but they did that too. Taken together, the various elements deliver a beer that's the biggest from Sailors Grave yet – not in terms of booze, which is kept to a sessionable 5 percent ABV, but body.

The oats help it punch well above its weight on the palate while the various parts come together with the subtlety that is fast becoming a hallmark of Chris Moore's beers. Atop the choc fudge base, the cinnamon adds a spiciness to the aroma, the vanilla and oak contribute a smoothing creaminess and the coffee builds slowly then lingers alongside the beer's dry, roasty bitterness. Whether it would encourage the drunken sailor to rise up or slip into a comfortable haze is up for discussion. That it's another fine beer from the East Gippsland, less so.