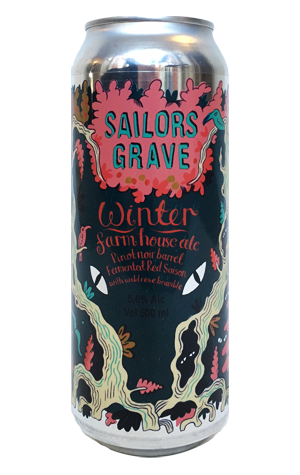 It's fair to say Sailors Grave has got off to a pretty unimpeachable start. Not even a year old, the East Gippsland brewery has won admirers for its beers and its artwork while working closely with its home region's producers. However, this could be the moment at which the good work is undone...

Sure, the ethos remains the same, with this winter seasonal following in the tradition of its predecessors in combining a farmhouse style ale with foraged ingredients; they've even brought Pinot Noir barrels from Lightfoot & Son, and the lees left inside them, into play here. The artwork on the 500ml cans is suitably complex, eye-catching and seemingly inspired by another foraged item that's recently been in season. And what's inside – a hazy, deep peach coloured ale that mixes toffee malt sweetness, berries, floral touches, a vanilla like creaminess and hints of cola and banana, all while keeping the tarter, dryer, more peppery sides of its saison yeast subdued – fits snugly within what we've come to expect from Sailors Grave.

So what's the problem? They lie to children. More specifically, they lied to children to make this beer. Yes, their kids thought they were making the return trip to Canberra to go to Questacon, but really it was so they could dig up a rose bramble – roots, brambles and hips – mum Gab had spotted at the side of the road on a previous trip. Now, you might argue this shows a dedication to celebrating all that nature has to give us, a passion for bringing new experiences to drinkers and, indeed, sets a positive example to their children in terms of creativity and appreciation of the environment. But remember this: every time you open one of these cans, you're saying it's OK to lie to kids.