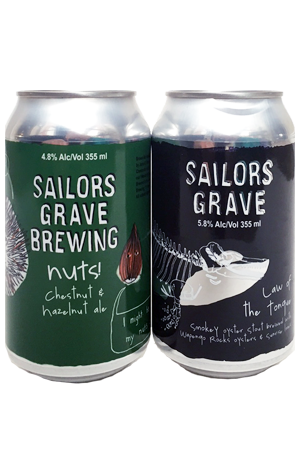 For the most part, the one-off and seasonal beers coming out of Sailors Grave have been farmhouse style ales. But, as they prepare to welcome another junior brewer into the world, they've sent out a pair of a more straightforward bent; well, as straightforward as you can reasonably hope to expect from them.

One is Nuts, a beer with a name and label that recalls the humour of which so many real ale brewers in the UK seem fond. To wit, it's a brown ale brewed with chestnuts and hazelnuts grown at Gourmet Australian Chestnuts and wood roasted by Lindenow Long Paddock. Both appear in cartoon form on the cans, the former declaring: "My nuts are big and hairy!", the other: "I might be small but my nuts are hard!" Tittering at the back over, the result is a creamy (thanks to the addition of lactose), toasted and nutty brown ale, with a touch of bitter chocolate and an earthy dryness underpinning things.

Law Of The Tongue, on the other hand, takes its inspiration from a (relatively) local legend: Old Tom, the most famous of the orcas that used to alert a whaling family on the Sapphire Coast when they were hunting baleen whales off the coast and lead them to their prey. In return, the orcas were allowed to eat their favourite bits – the lips and tongues – leaving the rest to the Davidsons. That said, there is (as far as we're aware) no whale, orca or tongue in the beer. There are molluscs, however, in the shape of smoked Wapengo Rocks Organic Oysters.

While smoked oyster stouts aren't exactly common, it doesn't seem that outré a path for Sailors Grave to tread and it's one with which they serve up smokiness that's both sweet and leathery in a beer that's smooth and pretty full bodied with flashes of brine, a hint of roast and just the faintest bitterness. But, being Sailors Grave, there's something else too. Having not read the can before pouring, we couldn't fathom why a smoked oyster stout would have a lifted, fruity, herbal jauntiness rising from its midst. Turns out there's sunrise limes in there too. Couldn't help themselves, could they...