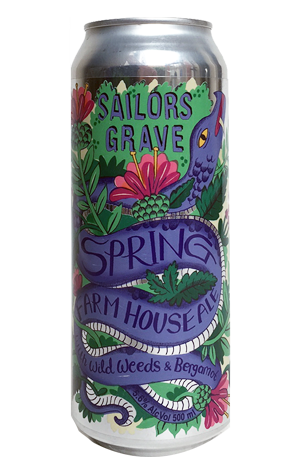 Each season, Sailors Grave puts out a new farmhouse ale showcasing ingredients obtained from other small producers or foraged on their travels. In the case of the 2017 release, it's a bit of column A and a bit of column B. The former comes in the form of High Country bergamot from Mountain Yuzu; the latter is a veritable smorgasbord of wild weeds – nettles, mallow, dandelion, cleavers, milk thistle and borage – collected by co-owner Gab Moore from her garden and the banks of the Snowy River that flows behind the brewery (with a little assistance/hindrance from Solomon, her son who was to enter the world two days after the foraging was completed).

After the sweet and fluffy winter iteration, we're back in dry, crisp territory here – and much more besides. They mention Chartreuse in their tasting notes and it's easy to see why. It's spicy, herbal and medicinal, with all manner of blackcurrant, pepper, nettle and aniseed like characters making an appearance. That dryness is potent too, almost tannic in its intensity, in another off kilter beer that will only bolster Sailors Grave's reputation among their growing band of admirers.