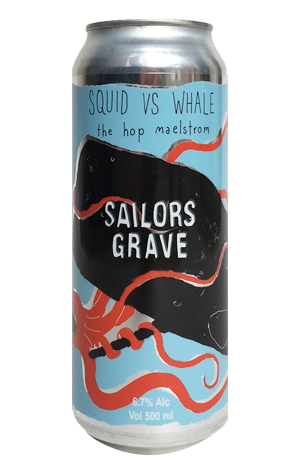 Squid Vs Whale is Sailors Grave's biggest beer to date, so what better way for a nautically themed brewery to mark the occasion than name it after a battle between two of the biggest predators on the planet? Admittedly, at 6.7 percent ABV, it's a long way from challenging for the title of Biggest Beer In Australia but it comes packing plenty of firepower.

Subtitled "the hop maelstrom" and described as "the closest to a NEIPA we will get", you can imagine what's on the agenda: hops, and plenty of them, plumping for all US, all fruity as varieties, Idaho #7, Simcoe, Citra and Amarillo. There's a secret weapon too: lactose. Now, we'll admit that, of all the tangents brewers have taken in the past decade, lactose or milkshake IPAs is one we've struggled with at Crafty Towers but here the lactose appears to have been added in a restrained manner, turning the hop aromas into something akin to the orange creme you get inside chocolates.

It means Squid Vs Whale is more like a big, fruity IPA with a touch of creamy sweetness, one with a slightly higher bitterness than most NEIPAs, that reveals some juicy red berries alongside those macerated orange flavours too.