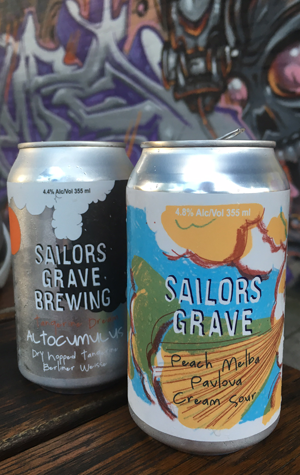 Sailors Grave comes bearing two more beers with an acidic underbelly and fruity additions as 2017 draws to a close. One is as much of a mouthful to ask for as it is to describe: the Peach Melba Pavlova Cream Sour. Taking inspiration from a couple of classic Antipodean summer desserts and combining them with some of brewer Chris' favourite ingredients, lactose and souring bacteria lactobacillus, this kettle sour also features peaches, raspberries and vanilla. Not as fattening as the dishes it looks to mimic (well, unless you plan to polish off a couple of four-packs), there's soft peachy aromas, a sharp, fruity acidity and a dryness lurking in its deeply cloudy depths, not to mention a dollop of cream that pops up just when you think it's done with you.

UPDATE! Since posting this write up, not only has the above beer snagged a spot in our Best New Victorian Beers of 2017 list, but the brewery has released a new version, with the only tweak a switch to white peaches. The resultant beer isn't vastly different – indeed the label is exactly the same so you'll be best served by a good bottleshop where staff can tell you if it's batch three in their fridges – but is a shade or two away from the original, both in colour (a little more pink and not as cloudy) and character (a little lighter and, in brewer Chris' words "perfumed"). It makes for a nice little coda to one of the most talked about beers of the Victorian summer.

As for Tangerine Dream, it's the latest in the brewery's seasonal Altocumulus Berliner weisse range that's previously featured blueberries and mandarins. Alongside tangerine zest and juice from their supplier Val & Biddy, there's some cumquats from the home farm, oats to boost mouthfeel and dry-hopping with Amarillo and Cascade for an added citrusy kick. If you tried the previous two, in particular the mandarin version, you'll know what to expect: a clean, light-bodied, citrusy beer – with some pretty lively juicy tangerine aromas here – plus a clip of refreshing acidity.