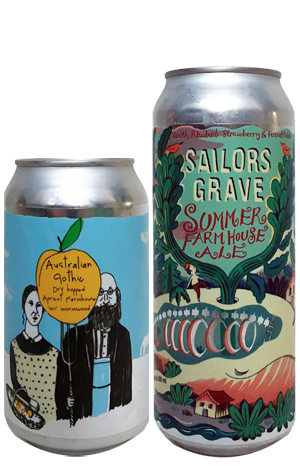 For all that they've cast their net wide when sourcing ingredients for their beers – wild weeds, seaweed, smoked oysters and so on – Sailors Grave's beers have tended to present them with a gentle subtlety. As time passes, however, some of the beers are coming on rather more stridently: still offering complexity but putting their message across more boldly. And that's the case with these two summer releases. Sure, neither farmhouse ale is big on the booze front, but nor do they hold back when it comes to character.

Australian Gothic puts apricots from Murray View Organics and wormwood from the Moores' own garden in the mix, the latter added alongside Simcoe and Summer hops at the dry-hopping/shrubbing stage. In partnership with the farmhouse ale yeast, they create an aroma that flits between spicy, herbal/medicinal, citrus and melon. It also creates an expectation that the beer will be quite creamy on the palate, making the sharp, tart tang that accompanies the yeast derived spiciness and citrus flavours something of a surprise. Certainly, it's quite the mouthful.

As, indeed, is the Summer Farmhouse Ale, completing the brewery's first annual slam. While it's a very different beer to its predecessor in the series – the Wild Weeds and Bergamot Spring release – there's a segue of sorts in that the aroma has a perfume like quality to it, albeit less intense and certainly less bitter. There's hints of fruity, spiced cocktails and something kind of savoury on the nose too, presumably the foraged fennel pollen playing silly buggers.

Joining said pollen are rhubarb and strawberry from Joe's Garden and Sardine Creek Farm, while the beer is fermented solely on chardonnay lees from Lightfoot & Sons winery. The former pair contributes a peachy orange hue plus berries and tangy, freshly squeezed fruit juice on the palate, while the cloudy as beer has a texture that's both creamy up front before being undercut by a tart, vinous acidity. It's another beer like little else, one we reckon is akin to working your way through a multilayered summer dessert (with, according to our tasting notes, "some carrot for good measure").