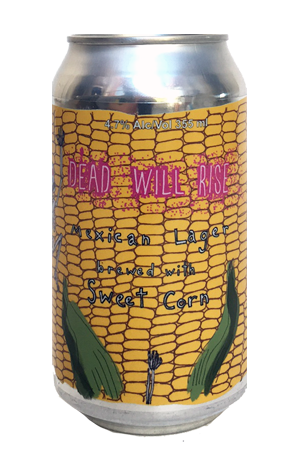 If you've climbed aboard the wagon marked Sailors Grave, you'll know that it's best to approach every new beer wondering what the twist is going to be: "Just what surprises lie in wait for me this time...?" Thus it was we approached Dead Will Rise, a Mexican lager brewed with 150kg of sweet corn from local Gippsland family, the Cotters, and prepared by "old man Joe". Given maize is a regular feature in such lagers and they've put it front and centre (and back and sides) of the can, it's hardly a twist.

What does come as a surprise is the aroma. You lift the glass to your nose expecting something restrained, lightly malty and, well, corny and instead are hit by pungent, predominantly citrusy, hop aromas. Those fruity hop flavours follow, dominating on the palate too. The corn character will likely make itself known more as those hops fade but, for now at least, what you've got is essentially a lean, hoppy pale ale. So maybe we'll go with that as the twist; as every week brings more and more experimental releases from brewers across the country, Sailors Grave has released its most "normal" beer yet.