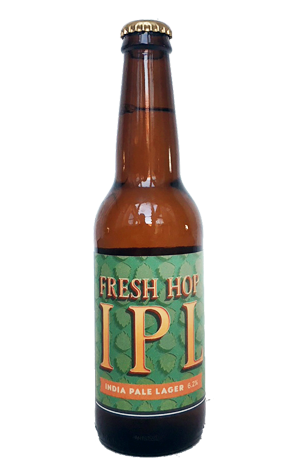 For the most part, the green tide of fresh/wet hop beers from Australian breweries that washes over the land from March into late autumn tends to feature hops sourced or sent from one of the country's two major growers, or those pulled from a homegrown collection of bines. But, as more small hop farms pop up from coast to coast, this time of year has become a time for their owners to garner a bit of attention too.

Among those smaller hop farmers is Brad Merritt, whose initial venture into craft beer in Australia was Oscar's Alehouse in Belgrave and who is now into his third harvest under the Yellingbo Brewing Company and Hop Farm banner. The first beers brewed with his hops were collabs with Kooinda and Mornington Peninsula Brewery in 2016, while among his 2018 partners is Hargreaves Hill, a relatively near neighbour.

The latter opted to showcase the hops in an IPL (India pale lager); the former supplied Victoria hops, a close relative of Galaxy that was dropped from Hop Products Australia's breeding program. The prefix India connotes the use of large amounts of hops, but anyone expecting them to produce a tropical hop bomb are in for a surprise. Here, the wet hops deliver herbal, earthy, drying characteristics with an impact that's more pronounced to taste than on the nose, where you instead find the sort of cracking, crisp malt aromas typical of a quality lager.

Indeed, for all its contemporary cachet – wet hops, a rare variety, a small local grower, heavy hopping (50kg added within 12 hours of picking) – it's a beer with at least one foot very firmly planted in the past, a curveball in these fruit salad days.