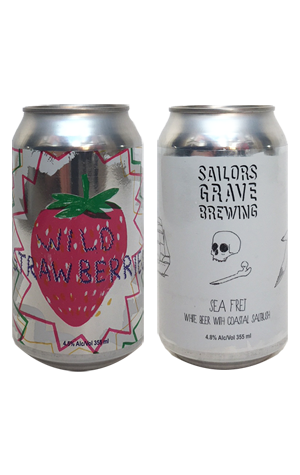 Late last year, the Peach Melba Pavlova Cream Sour became a surprise hit for the team at Sailors Grave, so much so that the beer has been followed by a number of similar releases. Indeed, you could argue that fruity, creamy sours are becoming something of a house style for the East Gippsland operation (well, apart from the farmhouse ales, goses, stouts...). They created another for the 2018 GABS festival and, again, it proved so popular they've kept on brewing it, even if such a beer sounds as unlikely a choice for winter as any.

Wild Strawberries was inspired by the Pnau song of the same name and follows a similar path to its lactose-heavy, fruity forebears. It kicks off with a creaminess topped by sweet berries and underpinned by a cleansing tartness before that dollop of sweetened cream arrives once all else is said and done. It's an unusual combo but one they're making their own.

As for Sea Fret, it's a beer that was out a few weeks back but got lost (at least for us) in the pre-, during and post-Good Beer Week madness. It's another that features locally foraged goods, this time coastal saltbush, which has been added to a bright white beer base. The result is something of a palindrome: it opens with a blend of herbal, softly spicy and fruity aromas accompanied by a kinda salty sweetness on the nose before delivering those same characteristics in reverse on the palate, ending with a drying, herbal finish.