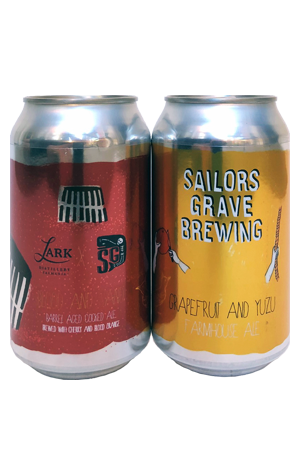 On a recent stop to see Gab and Chris at Sailors Grave, they revealed they had one new beer a week coming out at the minute (although hope to slow things a little after the current rush of madness). And these are two of the newbies seeing the light of day for the first time this spring.

Blood and Sand is a collaboration with Lark Distillery, albeit one far removed from that announced by Wolf of the Willows around the same time. While the latter features an imperial smoked porter, here the former whisky casks have been used to help recreate a cocktail said to be named after a 1922 Rudolph Valentino film. The liquid that filled them features all manner of grains plus sweet and sour cherries (which conjure its nigh on red hue) and blood oranges. Certainly, it's more cocktail than beer in appearance and is reminiscent of Maraschino cherries given an extra soaking in whisky. There's both malt sweetness and a touch of dryness on the palate, with a sour cherry tang wrapping things up.

As for Grapefruit and Yuzu, the clues are there in the title. The fruit was added to a light, kettle soured farmhouse ale base, with the result some perfumey phenolics alongside pretty intense citrus aromas. There's a potent dryness running right through it, aiding refreshment and lightening the body, while it's tart and tangy on the palate too. A rustic session ale for farmers.