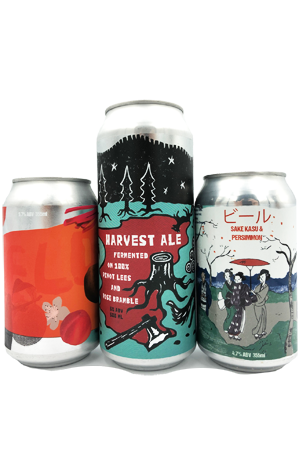 You likely know to expect the unexpected when it comes to Sailors Grave by now. But, even so, would you have expected them to put out one of the better locally-brewed hazy, juicy releases? Maybe, if you'd tucked into their Squid vs Whale IPAs, but more likely not. Yet, with Fields V2 – the second in their "Hoppy Hazy Juicy Farmhouse" series, they're up there.

Bringing an intensity that wasn't there in V1, it's as if someone has pierced an overripe Navel orange and squeezed it right under your nose. For me, it's oranges all the way, with the rhubarb and nectarine playing second fiddle yet becoming more noticeable as it warms. It's soft on the palate, although the drying tartness from the "cocktail of yeasts" and a lively carbonation give the beer structure and texture, creating one of the best sub-6 percent ABV juice bombs to come this way.

Harvest Ale is another collaboration with Lightfoot & Sons, with the beer fermented on the winery's pinot lees. Foraged winter rose bramble are this beer's adjunct of choice, one that pours a deep, ruddy amber and possesses aromas reminiscent of a barleywine with a little age on it. It's not as weighty as such a beer on the palate (it is just 5 percent ABV, after all), where there's a gentle cleansing quality underpinning the rich toffee and bread crust characters and lending it an almost citrusy underbelly. Quirky is as quirky does...

Now, sake is an acquired taste, so it should be little surprise that Sake Kasu & Persimmon – a pale sour fermented on sake lees, with added persimmon fruit, is too. Pouring a deeply cloudy pale gold, I picked up apple, almond and sake on the nose, while on the palate there's a light prickle and a touch of sour, acidic, tangy citrus, not to mention a sticky sweetness that stays around. Given the Moores are enjoying something of a love affair with Japan at the moment, expect more of this ilk.