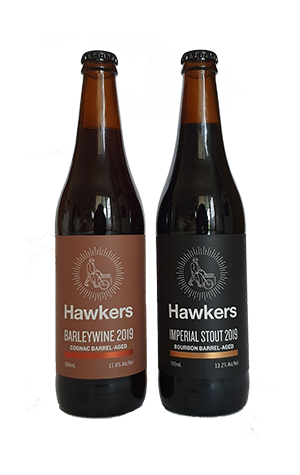 The darker, colder months are met with no little joy in Reservoir as, each year, Hawkers release a variety of dark and barrel-aged beers. Following on from this year's "straight" Imperial Stout 2019 – which you can read about here – you can now get your hands on 500ml bottles of a barleywine and an imperial stout, both of which have spent time in barrels.

The Cognac Barrel-Aged Barleywine's time in oak has given the beer a rich, velvety sweetness. There’s a lot of dark fruit at play too, mostly of the raisin and fig variety, and the vibrant sweetness when combined with the beer’s fluffy body brings to mind images of creaming soda. But it’s not all sweets and soda in this multifaceted affair, there’s a little coffee and even hints of cigar to be unearthed within a beer that will likely come together more as a whole over time.

The Bourbon Barrel-Aged Imperial Stout comes in at 13.2 percent ABV, which tells you it's enjoyed a decent injection of potency from the barrels; indeed, it feels like the brewers have pushed it to the limit of where it can be taken. Thankfully, by staying just the right side of madness, it's instead the sort of decadent beast you'll want to hold to your nose and inhale all night. Plenty of syrupy, rich dark chocolate remains from the base beer, but it's like a chocolate cake that's been baked with vanilla then dressed with a shot of espresso poured from a freshly emptied glass of bourbon.

It's an epic affair one member of the Crafty team likened to a velvety slip and slide in beer form, but one of the OHS-troubling ones from the 70s where you fly off the end and hit a wall, in this case one built of booze rather than bricks.