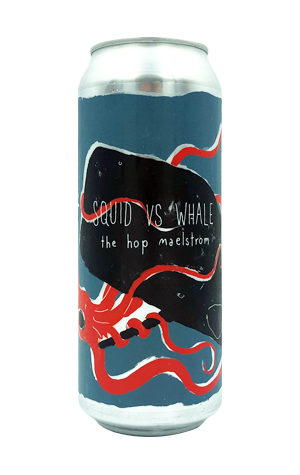 Cramming mountains of hops into a beer isn't the sort of activity you typically associate with Sailors Grave. But it's what they do with their Squid vs Whale beers – as the Hop Maelstrom subtitle tells you. It's now into its fourth iteration, with Galaxy, Idaho Gem and Citra the weapons of choice for the lightly lactosed IPA this time around.

Apparently, brewer Chris Moore suggested to the team he may have gone a little too far with the hops this time. [Isn't that the whole point of the industry today, Chris? Come on, man!] Certainly, were you to imagine a lightly lactosed IPA into which the brewer had gone a little crazy with hops, it would probably look like this: less cloudy than murky, as if flour or a dollop of cement mix had been dropped into you glass when you weren't looking.

There's rounded, sweet and fruity aromas, while sweet citrus, tropical fruit and hints of berries await on the palate, at least until they're overtaken by a more grippy, grassy, vegetal bitterness. If you enjoy drinking freshly strained hops, and we know plenty of you do, dive in!