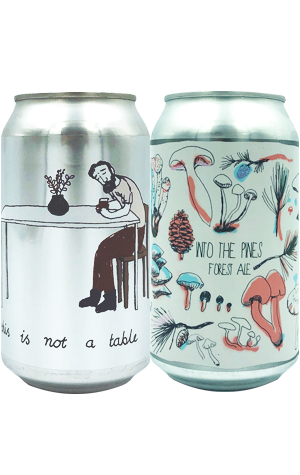 How do you make a low ABV farmhouse-inspired table beer any more Sailors Grave? How about dropping a reference to Magritte? In character, This Is Not A Table ticks plenty of the boxes they've made for themselves, rather than those you might have come across in other table beers (think honey like malts and Belgian golden ale esters). Instead it's leaner and more earthy, initially hay like but with a cloudy creaminess once quaffed then a farmhouse and Cashmere-Sorachi Ace hop-derived zestiness. The hops lean more towards the herbaceous than the citrus of the label, while what lingers is a peppery, rustic spice.

As for Into The Pines, it's a fresh version of their brown ale brewed with foraged pine needles and mushrooms. It looks like a slightly cloudy English bitter, smells like a nutty, earthy English brown and serves up sweet, nutty toffee flavours and a gentle earthiness. As with the first batch, shroominess is minimal and the overall package isn't as odd as the concept; that said, it remains an oddity in the contemporary beer world as who the hell makes trad English ales anymore?