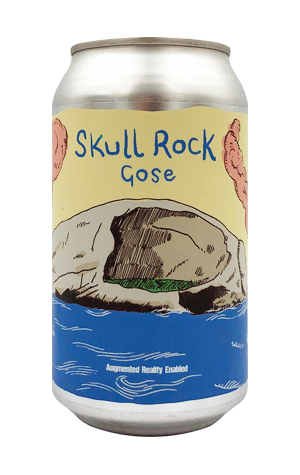 Sailors Grave launched with a gose as part of their initial lineup, back when the beer style was still starting to gain traction in Australia, and have returned to it many times since. Here, with Skull Rock, they do so again, albeit in a manner that's rather different to those that have gone before.

Sure, they've used the beer as an opportunity to showcase East Gippsland's bounty, with locally grown Alestar malt joined by indigenous Karkalla (AKA pigface) and Mentha australis (AKA native river mint). But there's a wider celebration of the region too: in partnership with Visit Victoria, the beer is part of the launch of a new eco-tour of Skull Rock, an island off Wilsons Prom, by Pennicott Wilderness Journeys. If you've got the Dreemar app on your phone, point it at the can and the label comes alive to tell the story of Skull Rock and the new operation.

As for the beer itself, it deals in subtleties, even by Sailors Grave's standards. There's nothing overtly rustic, little of the windswept nature of some of their foraged beers, but instead an easy-drinking gose, with a gentle, citric tang, a soft mouthfeel and a touch of the floral and herbaceous.