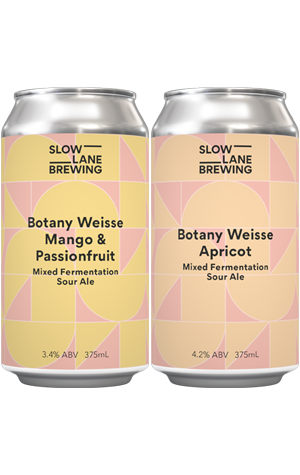 For a brewery named Slow Lane, there’s been no meandering when it’s come to new beer releases. Since opening earlier in 2020, Alex and Yvonne Jarman have been steadily putting out more of the all too rare yeast-driven European styles that have already won them plenty of fans in Sydney and beyond. While locals wait for the much anticipated tasting room, Slow Lane have released four new beers many months in the making: two fruited versions of the Botany Weisse, plus a barrel-aged Belgian sour brown ale and an English barleywine you can read about here. It’s the kind of four-pack liable to send specific types of beer obsessives into a state of excited delirium (me).

First up is the Mango & Passionfruit Botany Weisse. It looks exactly like you’d expect something that’s been sitting on mango and passionfruit for months to look like. Smells like lactic sourness and passionfruit but the flavour swings much more towards the mango. It very much reminds me of the sour mango Zappo lollies I used to eat by the kilogram in primary school. Don’t get me wrong, the passionfruit is there but the mango just carries the lot and lingers around for a while afterwards. There’s just a really nice level of tartness here and, if you can allow it to warm up a bit, there’s a hint of Bretty funk lurking in the background.

The Apricot Botany Weisse isn’t simply a rehash of the mango and passionfruit with different fruit. It’s slightly higher in alcohol, dry hopped with Hallertau Blanc, spent a little while longer in tank and, quite frankly, absolutely whips.

This beer is much more reminiscent of some of the wild ales being produced by the likes of Van Dieman and Wildflower. Aromas of white grape, apricot and that familiar Brett funk carry through into a body that’s juicy, tart and dry. As cool as putting these types of beers into cans is, I desperately wanted to have an open 750ml bottle that simply had to be finished off.