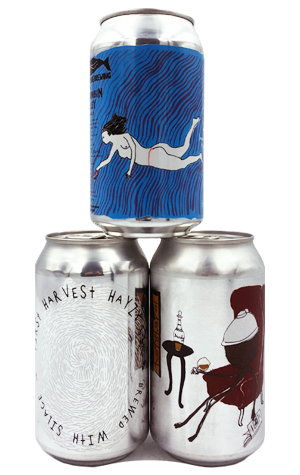 Could there be anything more Sailors Grave than plastering "Brewed With Silage" on the label of a beer? Choosing to brew a beer with "pasture grasses fermented anaerobically with naturally occurring lactic acid bacteria" in celebration of a bumper hay crop nails so much of what the East Gippsland brewers are about: farmers unafraid to experiment with any natural ingredient they can get their hands on, and eager to celebrate the natural bounty of their home region.

The beer in question is the amusingly titled First Harvest Hayzy, which – thanks to the BRU-1, Sabro and Galaxy hops plus lactose and a body-building grain bill – leads off with rich, creamy citrus and sweet toffee biscuit aromas with just a hint of funk looking to catch your attention. The flavours aren't that dissimilar to an American pale ale despite the very un-APA recipe, with a welcome depth to the malt character. Sailors Grave don’t do hop forward beers very often, but when they do they tend to nail them – and, as here, land them a little left of centre too.

From APA to AMA and a collaboration with fellow experimentalists Currumbin Valley Brewing from the Gold Coast. Sailors co-founder Gab Moore comes from a family of abalone farmers and here those molluscs appear in a gose alongside lemons and aniseed myrtles supplied by Noel and Trish Butler from Nura Gunyu Aboriginal Cultural Education. A floral perfume with distinctive anise characters is joined by lively and gently spicy cracker malt flavours, and a saltiness that boosts mouthfeel and helps dry out the finish. It makes for a typical Sailors Grave beer: easy-drinking but with subtle farmhouse complexities.

As for Magic Pudding, as the name and label suggest, we've got to it a little late as it's their Christmas pud-inspired beer: a slightly cloudy, deep amber, fluffy, off white-headed affair in which there's a spicy edge to the dried fruits and burnt caramel malts on the nose. It is essentially slightly tangy Christmas pudding in a glass.