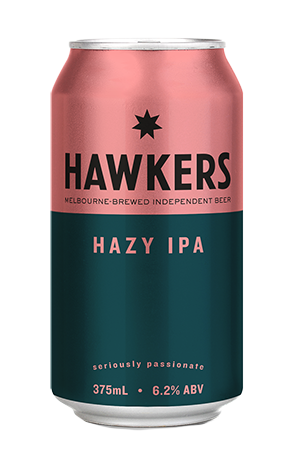 If there’s any doubt there’s some love for the Hawkers brand in the beer market, the addition of this new member to their core range should dispel it. Hazy IPA was released on the afternoon on July 26, 2021, and, less than 24 hours later, it was gone from the brewery’s webstore. Considering nobody had drunk the beer when it launched, it’s not a bad sign for the brewery’s reputation for consistency either and, fortunately, at the time of writing, it was still available from a wide range of retailers, with another batch on its way too. Looking ahead, as with the Melbourne brewery's trophy-winning West Coast IPA, the plan is to keep it returning to shelves soon after they’re depleted, keeping stocks as fresh as possible.

Anyway, once you manage to get your hands on one, what can you expect? Even though the style – and this beer in particular – is known for being fluffy and pillowy, what comes to mind above all else when drinking Hazy IPA is sharp precision. That should be no surprise either, given the range of hoppy beers Hawkers have been brewing of late, and the fact the hop combination used here isn't too different from that in the brewery's Hazy Pale which launched in 2020.

For Hazy IPA, there's a very precise way the combination of Galaxy hops from Australia, Motueka from New Zealand, and two of America’s hazy hop masters in Mosaic and Citra, come together provide an incredibly balanced beer awash with tropical juice flavours of passionfruit, lychee, kiwifruit, candied orange and lime. While it is low on the bitterness, there’s still enough in there to pull Hazy IPA together, while the hop notes continue to shine well after the beer is finished.

NB: If you're a member of The Crafty Cabal then keep your eyes peeled for updates, we have a few mixed cases coming up in a giveaway soon.

A number of retailers are offering a bonus tin of Hawkers' Hazy Pale with the purchase of packs of Hazy IPA. Participating retailers are here.