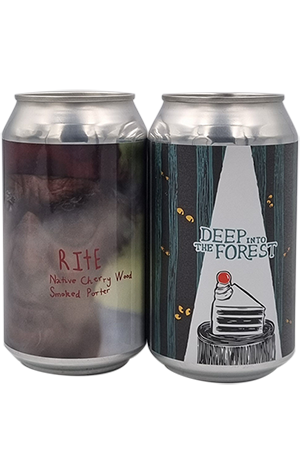 Sailors Grave’s Deckhand is the Orbost brewery’s membership club which sees them ship a dozen beers every couple of much to their thirsty fans, or salty seadogs as they're occasionally known. It typically includes a mix of core range beers, limited releases and new beers and included in August's box are these two new ones, which are also more widely available. Rite is the latest in the brewery's collaborative Jerra Ngia - story you, story me - series with Nura Gunya; an education and cultural organisation run by Noel and Trish Butler. Rite is a porter brewed with native cherry (Exocarpos cupressiformis) smoked malt. Though it pours a deep brown hat's very close to black, it’s towards the end where porter's often are and there’s quite a dryness that hits upfront. It's also one that runs the length of the beer and cuts through a rather herbal mix of smoke, cherries, bitter chocolate and campfire smoke.

Also on the collaborative path is Sailors Graves’ latest beer made with the good booze retailers at Blackhearts and Sparrows, Deep Into The Forest. While Rite is towards porter’s lighter edge, this black forest-inspired beer is towards stout's darkest and has seen the brewery impressively pack that dessert into a beer form. It’s almost as indulgent as chocolate mudcake and also includes vanilla, cherry and raspberry running through it, with the biggest point separating it from the sweetness of actual cake being the biting bitterness that runs through it.