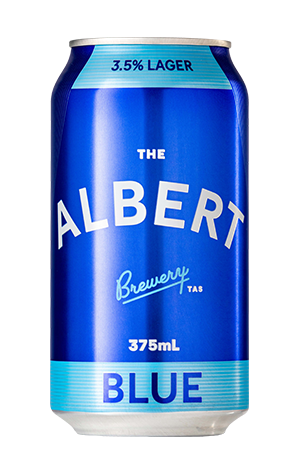 The Albert Brewery and Taproom

Sitting in The Moonah Hotel and Cellars, just around the corner from The Albert Brewery, shortly after it opened, there was no shortage of older folks there who'd just knocked off for the afternoon and had rolled into the pub chasing a mid-strength. At the time, the only mid-strength on tap was a sour beer and I remember thinking, “Gee, there’s a big opportunity for a local player here.” Sure enough, just a few weeks later The Albert Blue mid-strength lager was released.

The Blue has been designed with the classic mid-strength lager drinker in mind. Brewed to be easy-drinking, it’s what you give someone that says: “I’ll have a beer thanks, mate.” Far cleaner than many other versions of the style, this lager-lover was very happy to find it on tap at the local, especially when operating a motor vehicle or giving myself a haircut is required later in the evening. It's a beer that's proved popular too, soon joining other members of The Albert's core range in tins, making it a very blue, Blue.