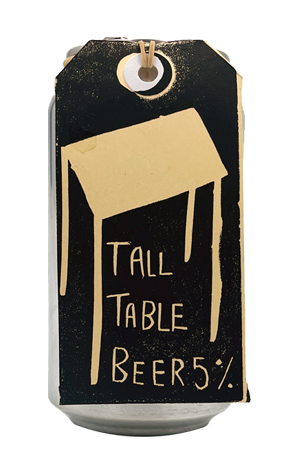 Table beers are appearing with greater frequency than ever before in Australia right now. OK, so there’s still bugger all of them, but I’ve seen maybe four of five new ones appear in the past few months, and coming from a base of near-zero, that means we’re well into record-breaking territory. Sailors Grave released one back in 2019 too – This Is Not A Table – but this one is a bit of a milestone for the Gippsland crew.

It’s the first commercial release featuring a new house culture that started out with the bottle dregs from a cult Belgian saison, before being lovingly nurtured through its evolution to this point. And it’s fair to say its move from one hemisphere to another has left much of the source material intact: Tall Table couldn’t be much more Belgian unless they sold it with a plate of waffles and a bowl of frites with mayo, while a kid took a pee into a fountain next to you†.

Pouring with a pale lemon haze – highly appropriate as there’s a lemon aplenty amid the floral, white peppery, spicy bouquet – it’s higher in ABV than traditional table beers, which often sit under 3 percent ABV, but you’d happily have this at yours, given how well it would accompany plenty of cuisines. There’s some light malt sweetness, gentle, spicy esters, and a dryness of finish only Belgian yeasts can deliver.

I look forward to seeing where the new house yeast – one of two they’ll debut this year – crops up next, as here in a beer with a simple recipe, it serves up plenty of enjoyment.

† Look, while my more recent visits to Brussels have involved breweries and bars, a highlight of childhood trips with the folks was to pose next to Manneken Pis. I can't help it if of all the memories forged as a kid this one has stuck more than most.

Initially, only available on tap at Sailors Grave's cellar door

And in their Deckhand subscription boxes