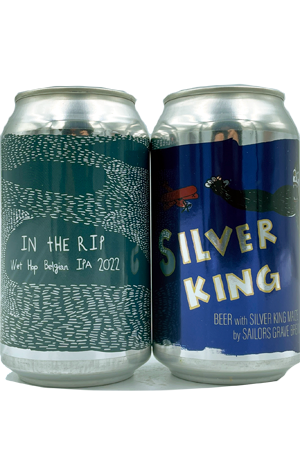 Similarities between the two beers pretty much end there, however, as In The Rip 2022 sits more in the gentle farmhouse space – the hops present as soft, grassy, herbaceous and oily rather than wantonly bitter as in the NZ Hops release. Aroma wise, whatever the midpoint between straw and anise is, this is that, while a touch of honeyed sweetness adds to the beer's easy-going nature.

With Silver King, the Moores are back celebrating the produce of their East Gippsland home. In this case, it's a lager featuring an heirloom maize corn called Silver King alongside popcorn from Snowy River Seeds. Pouring a deep golden, that familiar maize character found in corn-based lagers is front and centre while, as with In The Rip, there's a honey-like quality to the sweetness too, ensuring there's little bitterness to get in the way of their mate's goods.