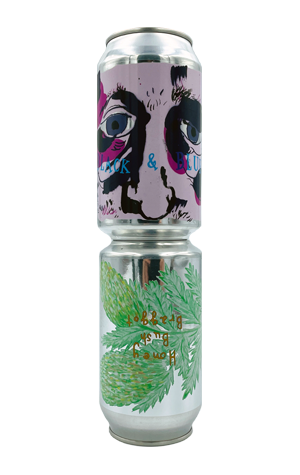 I'm the sort of person so lacking in maturity that, upon meeting someone who told me their mother hailed from Malta at the weekend, I couldn't help but rehash one of the awful jokes my dad used to have on repeat in my youth – the one that ends with the line: "Poke them in the eyes." As such, I seem to be unable to consider Sailors Grave's Black & Blue without thinking about the gag: "What's black and white and red all over?" This despite the fact the beer is called Black & Blue and features a close-up of a battered face – perhaps representing the beer and hospo industries right now – on the label. That said, the liquid is really red – to the point it's a lurid, bloody crimson.

It's topped with the sort of bright and light pink head that certainly causes a double take, like when you're at Uluru at the moment the sun dips across the horizon and it’s as if someone has flicked on a million halogen lights inside Mother Earth's imperceptibly slow-beating heart. Bringing things into a more mundane realm, the blueberry and blackberry-laden Berliner weisse smells like a berry frozen yoghurt – creamy and neither overly sweet or sour, potentially ripe for enjoying by the scoop – before finishing like a boiled lolly. Very yum.

If you're wondering why the other can in the photo is upside-down, it's because that's one way in which they indicated this was Nitro Honey Bush Braggot – a new, shake-before-you-pour version of a past release delivered in the manner brewery co-founder Gab Moore always intended. It's become possible due to upgrades at their East Gippsland home, and has been trialled in a beer with quite the backstory. Created in partnership with Nura Gunyu, it's inspired by traditional methods of gathering and soaking nectar-heavy blossoms. For this braggot, they've used pure Banksia Serrata honey from Tambo Valley Honey, and you can read more about the project by scanning a QR code on the cans.

As for the liquid inside, you'll find an auburn pour with a head like a Kilkenny. In terms of character, it reminds me of an English old ale with the added sweetness of an Irish red and accoutrements that still manage to poke through the nitro creaminess. There's heaps of raisins and stewed plums, floral honey, and ruby red ale malts, yet remains pretty light and far from sticky.