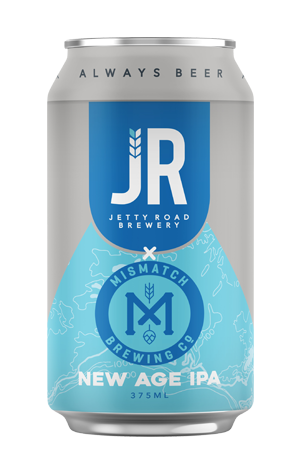 If you're a follower of the machinations of the modern beer world, you'll spy this collaboration and note it's taking place between two of the brewing companies that now operate under the Mighty Craft banner. But it comes with a cuter side too. With the founding head brewers at both Jetty Road and Mismatch no longer at the breweries they helped launch, the two people now holding those roles are former colleagues: Sean Varley (Jetty Road) and Tom Wood (Mismatch) brewed together at Bright Brewery back in 2016.

Reunited for this New Age IPA, they chose to celebrate their old stomping ground by featuring Eclipse, Galaxy and Vic Secret hops from the High Country (added at a rate of 15 grams per litre in the dry-hop for stats fans). So, what is a "New Age IPA"? According to the brewers, it's one that combines elements of a West Coast with elements of a NEIPA, in this case creating a very lightly hazy, deep golden and fruitily aromatic and dank IPA.

The fruits are delivered with a pithy, rind-like grip – there's grapefruit aplenty – given free rein by the beer's relatively light body and low carbonation. Those fruit flavours segue into a potent bitterness pretty quickly before that rind-like fruitiness returns in its wake.