Whether your first encounter with Jetty Road is walking into their highly impressive brewery venue in Dromana or picking up a pack of their beers, complete with its sleek and polished branding, you might well conclude Jetty Road arrived in the world fully formed, the result of calculated planning and deep pockets. Spend some time in the company of the founders and it doesn't take long to realise the reality is rather different – and that their story is, in many ways, that of the classic craft beer startup.

Head back in time, back beyond the days when they rocked up to the Ballarat and Bendigo beer festivals with just one beer and no brewery to call their own, and you'll find a pair of mates on the Mornington Peninsula with a passion for good beer and a talent for brewing it.

Indeed, the story of Grant Rodgers and Blake Bowden goes back way beyond that too. The pair were born within a week of each other and grew up together, although it was only after they headed off on separate adventures overseas that the idea for their own brewery was sparked.

While Blake had started learning to brew at just 15 – under the guidance of his boss at a cabinet makers – for Grant it was on a trip to Europe aged 21 that his taste was sparked. After experiencing beers, breweries and hospitality in France, Spain and the UK, he wrote the first business plan for what would become Jetty Road while in Malaga.

Later, once he was back in Australia and Blake had returned from a period living in London, they began homebrewing together – "getting a lot of exploding bottles and all that stuff," Grant recalls – and planning in earnest.

It took no less than six years from that first business plan to their first beer, but it was a period that allowed Blake to lay down and hone his recipes. Along the way, his homebrewing boss and now partner in Jetty Road, Simon Weir, was invited to help fit out Mornington Peninsula Brewery's venue, which in turn led to Blake lending a hand and gaining an insight into commercial brewing. As such, when they brewed their first batch of Pale (at Mornington, of course) it proved an instant hit. And so the Jetty Road journey began to gather pace.

A year on from selling their first kegs in October 2016, they packaged their first run of cans at KAIJU! before, in December 2017, they opened their Dromana venue; their 25 hectolitre Premier Stainless Systems brewery (and 300 litre pilot kit) was fired up the following September. By this stage, their vision and the quality of their beers had caught the eyes of the team at Founders First, the "craft accelerator" looking to invest in independent craft breweries and distilleries in Australia, and became their first investment partner.

Since getting his twin breweries up and running, Blake has rapidly expanded the lineup. There's a core range of typically hop forward beers ranging from a Bavarian-inspired lager to a punchy-yet-approachable IPA plus a colourful array of seasonals, often fruited, that have started appearing in limited can runs too.

As for the venue, it has a capacity of 220 yet regularly has to turn people away – just as well they're part of a growing hub of small producers on an estate that's also home to the gluten free TWØBAYS brewery, Bass & Flinders Distillery, and a coffee roaster among others. It's a warm and welcoming warehouse that serves up a rotating lineup of their beers plus the odd guest tap (often Bonza Brewing – the label conceived by Blake's brewery offsider Mick) and is centred around a bar built with reclaimed timber from Hastings Pier and a giant mural painted by local artists Snakehole, who Blake and Grant know from high school.

There's a full commercial kitchen staffed by six chefs who turn out a family-friendly menu focusing on local produce, plus a kids play area and a courtyard lining the wall where the brewery is housed. It's become something of a community hub too, hosting everything from yoga to a wake.

The family and friends vibe continues throughout the business. Grant's partner – a textile designer by trade – is their brand manager, while the duo were joined by family friend Nick O'Brien (who brought hospo experience), his mate Jonathan Pritchard, Blake's old boss Simon and his apprentice Shayne Bland as partners in the business.

Roll on to 2020 and, at time of writing, you can find Jetty Road's beers far from their Dromana home, both in independents and the country's larger retailers. As a member of the Founders First group of companies that includes the likes of FogHorn, Sauce, Sparkke, Slipstream and Ballistic, they're also part of the Indie Craft Collective sales force. And they're set to open a brewpub in South Melbourne too.

All in all, while it might have taken them six years to turn their business plan into that first batch of Pale Ale, it's clear they've wasted no time since.

Which just leaves us with the name. Given their brewery and venue is in Brasser Avenue, why Jetty Road?

It all dates back to their early homebrewing roots, back when Blake was shown the ropes by Simon. At the time they went by the name Jetty Rd Brewers and, given where that hobby has led them in the decade and more since, why look for another one?

Towards the end of last year the Mornington Peninsula gained another two new breweries. Blake Bowden is the head brewer of Jetty Road, which launched with a contract brewed pale ale and has just opened its own venue in Dromana. 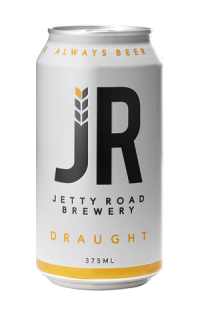 While balance and approachability is central to Blake Bowden's approach across the board, it's fair to say the Draught is designed to be the most approachable of Jetty Road's beers – even the name tells you so. But, while some small brewers have decided to lean towards the macro lagers of Australia's big brewers when creating such a beer, here the inspiration comes quite clearly from Europe. While there are Kiwi hops at play within Draught, the aromatics are more reminiscent of the classic noble… Read more
Pale Yellow 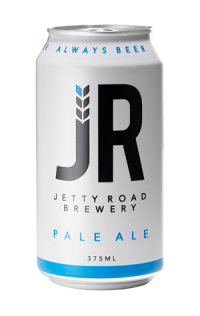 The beer with which Jetty Road was launched and started catching the attention of Victorian beer lovers is their entry into the busy world of American-inspired New World pale ales. And it only takes a quick swirl, sniff and sip to understand why it helped accelerate what had been a slow and steady move into commercial brewing. Big-hitting US hops Mosaic and Simcoe deliver citrus on the one hand, candies tropical fruits on the other, plus a touch of resin at the end. It's not a bitter pale ale, however;… Read more
Golden Yellow 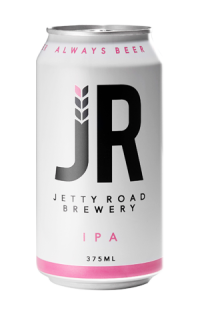 Jetty Road's IPA is a past gold medallist at the Australian International Beer Awards and it's not hard to see what the judges found to enjoy. There are bigger, brasher and more bitter IPAs out there, for sure, but here the focus is on taking the sort of joys to be found in their Pale and ramping things up – just not too far. The beer sits sub-6 percent ABV with Blake Bowden focusing on squeezing as much character as he can from the US hop varieties Ekuanot and El Dorado. I picked up ripe paw paw,… Read more
Golden 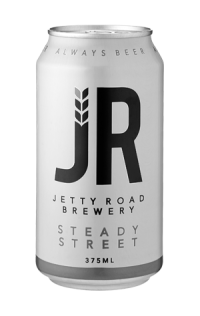 We've been blessed with many a tasty arrival in the mid-strength space over the past few years, and not just thanks to the rise in fruited Berliner Weisse and Gose. Many brewers have got around the art of delivering hop character and decent body at 3.5 percent ABV without having to go heavy on chewy specialty malts, and Blake Bowden is clearly one of them. Steady Street is hoppy as hell for such a beer, serving up a smorgasbord of passionfruit, grapefruit, lime and melon from the Cashmere and Amarillo… Read more
Golden Yellow 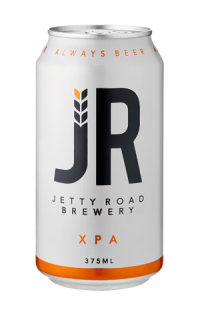 Slotting in between their Pale and IPA (with Steady Street forming the lowest ABV end of their core range hop quartet), Jetty Road's XPA is more than a filler as it offers a very different character to the beers by which it's bookended. Indeed, with head brewer Blake Bowden enjoying beers with a little more hoppy bite than some of those he's put into the brewery's lineup, he regards this as his pale ale. The hop character leans towards to the citrus – from soft mandarin to pithy grapefruit –… Read more
Golden Red IPAs seem to be something of a transition beer, not in the sense of moving drinkers between levels of appreciation, more in the sense of moving between seasons. You find them appearing when autumn arrives and also as we head into spring and beer lovers' thoughts start drifting from the dark delights of winter towards brighter days ahead. And, in the case of Jetty Road's late winter seasonal, it's a red IPA that leans towards to lighter end of the style, at least in appearance, filling your glass… Read more
Red As origin stories go, that of Infinite 8 is rather atypical, inspired by an octopus mural by friend of Jetty Road Josh Brown that made its way onto one of the brewery's vans and, ultimately, a discussion as to what said octopi would look like in beer form. And that turned out to be an 8.8 percent ABV IIPA featuring eight varieties of US hops. Initially, you'd be most likely to find it at the Dromana taproom, poured under the watchful eye of its inspiration but for winter 2020 it's been given a limited… Read more
Golden

And other good beer stockists in VIC, NSW, QLD & SA The Mornington Peninsula has long had a reputation for its wineries and the past decade has seen the region's brewing community swell and garner attention across the country too. There's much more to be enjoyed too as it becomes home to an ever greater variety of small producers, both booze-oriented and otherwise, and it's one of those – the Mornington Peninsula Chocolatier which opened at the end of 2018 – Jetty Road have partnered with for their autumn 2020 seasonal release. The chocolatier… Read more
Black Brewer's notes: Here’s to the humble Aussie fish n chip shop, where deep frying anything goes. Even pineapple. We’ve taken this Australian icon and transformed it into a fine Jetty Road Sour. This lighter, sour style boasts tropical pineapple flavours with the signature cinnamon zing and lactose sugar for battery goodness. Complemented perfectly with some minimum chips. Brewed to imitate the traditional beers of Goslar. These beers were sour due to lactobacillus inoculation and salty from the… Read more
Pale Yellow If you're going to name a beer after a Tarantino movie that's typically unsparing when it comes to violence, you're going to expect a bit of aggression – not a characteristic normally associated with Jetty Road's beers. And while it doesn't take a sledgehammer to your senses, this NEIPA-looking beer does come with both pistols loaded. Firing from one barrel is the mango; hold the glass to your nose and close your eyes and you might think there's chunks of fresh mango or just-squeezed purée there… Read more
Golden Yellow It would appear Jetty Road's head brewer Blake Bowden has deservedly developed some confidence in his brewing ability over his years of brewing both at home and commercially. This beer is proof of that: it was his first ever brew of a fruit sour and he went straight in with a 2,500 litre batch... Add to the batch, in the fermenter, was 400kg of aseptic puréed blueberries which lend the beer it's clear blush appearance. There's some berry-tinged sweetness and a little sprightly zest on the nose,… Read more
Red