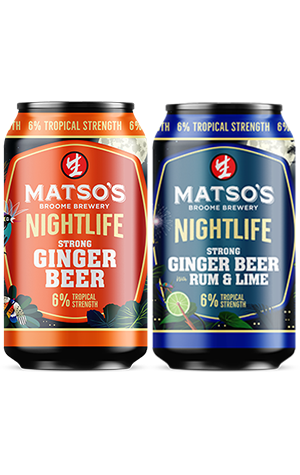 Australia first alcoholic ginger beer gets a tune-up ahead of summer 2022/23 as the Matso's flagship welcomes some of Broome’s after dark humid energy. Tropical Strength nearly doubles the mid-strength OG’s ABV, and in the process the ginger bite feels more harmonised with a fuller body to work with, before a lengthy dry conclusion awaits another sip.

Meanwhile, its Nightlife sibling muddles the glass for a riff on Bermuda’s unofficial national drink, the Dark and Stormy. As with the former, proceedings are integrated, with rum character appearing more as confectionary vanilla than fortified sugar cane action, and the hint of lime adding credence to the cocktail premise.