It used to be the case that once you passed Grand Ridge, you entered a craft beer wasteland, with the Mirboo North brewery Victoria's easternmost outpost. Not any more, with Bullant Brewery opening near Lakes Entrance in 2011 and bringing locally brewed beer to the people of East Gippsland.

Located in the heart of Bruthen, it combines a copper clad brewery picked up from a brewery in Richmond, Virginia, with a bright and breezy restaurant and decking looking out across the surrounding farmland. Owners Neil and Lois Triggs, who were already established in the area's tourism business through nearby Stringybark Cottages, have been quick to place their venture at the heart of the town's community, even sponsoring the popular annual Blues Festival, which attracts thousands to Bruthen every February.

Utilising a long background in home brewing, Neil oversees the brewing, producing half a dozen beers named after local landmarks which pour from the eight taps at the brewery - often alongside guest beers and ciders - and are available in longnecks and mini-kegs from the bar, some regional stockists and, increasingly, from outlets around Melbourne.

The kitchen produces a wide range of dishes, from snack size small bites for those dropping in to sample the beers to sharing platters and full meals, with a menu that combines pub classics with pan-Asian-inspired fare. You can catch live music on the deck at weekends too. The Great Alpine Road is generally open all year round so if your heading for Mount Hotham for skiing or touring during the warmer months Bullant becomes a southerly stop for the keen beer tourist wishing to head along the High Country Brewery Trail. 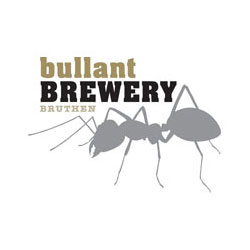 Bullant's take on the India Pale Ale style features plenty of floral and earthy hops alongside some caramel and toffee malts in a beer that packs a high level of bitterness too.… Read more
Golden

Registering at the lighter and sweeter end of the stout scale, this dark reddish brown beer is low on roastiness and high on chocolate and caramel. There are hints of dark fruit there too, with a relatively high alcohol content lending it a full mouthfeel.… Read more
Dark Brown

Full in the mouth and big on banana and bubblegum aromas, this take on the German hefeweizen style is designed as the brewery's summer quaffer.… Read more
Pale Yellow

An American pale ale that uses classic US Cascade hops to attain a fruity, citrusy aroma. Biscuity, toffee malts mix with a marmalade like bitterness in a faithful take on the style.… Read more
Golden

Bullant Brewery is Victoria's easternmost crafty outpost, a relatively new addition to the Aussie beer landscape that is not only bringing craft beer to East Gippsland but also offers the people of Bruthen the town's best dining spot too. Their summer seasonal has sessions on the brewery deck looking across the surrounding farmland in mind, as it's a four per cent English style bitter. Brewed with Maris Otter and crystal malts and East Kent Goldings hops, it couldn't be more traditional if it tried.… Read more
Golden