Your friend catches your eye across the table. “Another beer?”

“No reason why not!”

She hands you a tinnie of Tropical XPA and grabs her third bottle of Refreshing Ale. You pass her the bottle opener and hear the familiar hiss of the lid, then stick your can in a stubbie cooler and crack the top open. You cheers across the table, and everyone else at the barbecue joins in – clinks all round. The hop aroma wafting from the top of your tinnie draws you in for a cool crisp sip, those fruity XPA flavours, that slightly bitter finish you love about beer. You find yourself double checking the can – yep, definitely non-alcoholic.

Jaz Wearin started NORT after she had a string of reasons to want a good non-alcoholic beer for herself: pregnancy; the stresses 2020; and the desire for more balance in her everyday work life.

“Running your own business is bloody hard work. I work seven days a week, little kids waking up early, want to chuck some exercise in there to keep myself sane, and I was really getting sick of hangovers!”

And since Jaz has been in the craft beer industry for years (she’s one of the owners of Modus Operandi Brewing), she was never going to settle for something second rate; her goal was to make a non-alcoholic beer with aroma and body and bitterness. One that tastes and feels like she’s drinking beer. The result is NORT.

Naturally brewed using particular malts, a special yeast strain, and processes that ensure no refermentation, NORT is craft beer… that just happens to be less than 0.5 percent alcohol.

For those who want something straight down the line, the flagship Refreshing Ale is designed to provide that hit of refreshment with a hint of bitterness in the backend. Those after craftier flavours can look to the other styles in the range – Pacific Ale, Tropical XPA and All Day IPA – which bring more hop aromas and flavours to the party.

The label proudly boasts that NORT beers are independent – good for the Aussie economy – as well as low calorie – good for the waistline. But perhaps the best thing is the liberating feeling of drinking a tasty beer that’s non-alcoholic. To have a few NORTs in the middle of the day and still concentrate. To zig-zag between alcoholic and non-alcoholic beers and have a night that ends as well as it starts. To indulge your tastebuds even when you’re driving or getting up early.

Because NORT isn’t designed only for people who are off the booze for good, but is also for those taking a break from drinking – the term “sober-curious” has entered our lexicon, after all. NORT can be a beacon of light for people who are doing FebFast, Dry July and Ocsober yet still wanting to socialise or unwind with a drink. And anyone conscious of their drinking and wanting a night off alcohol, or even just wanting to space out the heavier beers with a few non-alcs, can turn to NORT for a well-deserved tipple.

This is the beauty of NORT. It’s versatile. It’s powerful. It’s freeing.

It’s for all those moments you’d love to crack open a beer, but it’s not the booze you’re after – it’s that satisfying feeling of cracking open a beer for some relaxation, a reward, or just some old fashioned refreshment.

NORT’s tagline – “Enjoy More” – captures the positive and life-affirming goal of the brand too.

“Whatever your ‘enjoying more’ means,” Jaz says. “It might be enjoying more beer… or it can be completely off the booze and just enjoying more out of life. For me, it’s been really about balance.”

Out on the town, or out on the boat. Sitting down to lunch, or sitting on the beach. After a long run, or after a long day at work. Celebrating a mate’s birthday, or celebrating the end of the week.

Whether you’re after relaxation, reward, or refreshment, you can always grab a NORT. No reason why not. 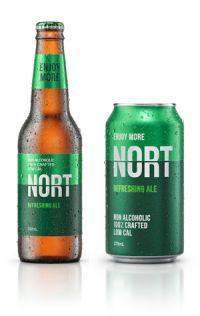 Tssst. Clink. Glug glug glug. Ahhhhhh. When NORT founder Jaz Wearin was developing their flagship Refreshing Ale, she thought about all the things she wanted out of a non-alcoholic beer as opposed to a different non-alcoholic drink. “I was after something that tasted like beer,” she says, “but also, if you’re going to be drinking a non-alc beer, you want those cues. Opening the lid, cheers-ing with glass. Then the aroma, which is hard with a non-alc. Mouthfeel. Bitterness - need a slight… Read more
Golden 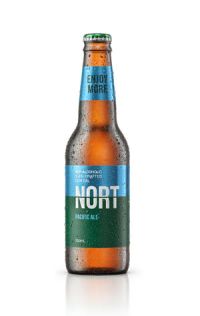 Do you remember the first time you got a whiff of a Pacific Ale? That burst of fresh passionfruit that magically makes you want to go for a surf (even though some of us would have to wear a helmet on our head and floaties on our arms). Released in bottles, since that’s the format most of us expect from this style, NORT’s Pacific Ale captures the nose-flooding essence of Galaxy hops. A natural sunshine-y haze matches the summery aroma, which blends rich passionfruit with a little pine needle freshness. The… Read more
Golden Yellow 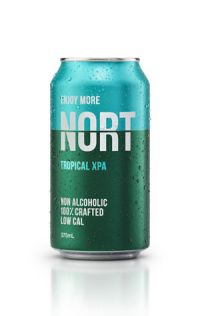 NORT’s flagship refreshing was designed to appeal to the widest possible audience – mainstream and crafty drinkers alike. But founder Jaz has been in the craft industry for years, and so a variety of styles and elevated hop flavours were always going to join the range. While the Pacific Ale is all about whisking away the flavour for maximum refreshment, the Tropical XPA brings bigger hop flavour that hangs around for longer. Bright, hazy orange gives a juicy appearance that pays off in the mouth… Read more
Golden 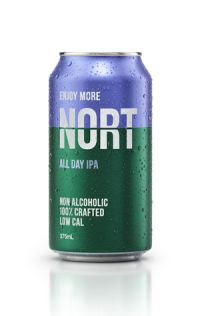 You’re having a session. You’re on hazy IPAs, and some of them are six, seven, eight percent ABV… and you’re ready for a breather. A cleanser. But you still want to stay on the flavour trail. Enter NORT’s All Day IPA. It’s not easy to make a non-alc this aromatic, but the team team has managed to pack in plenty of hop aroma – mainly citrus, with a touch of resin and some dried pawpaw sweetness. The hop character’s more subtle once it gets to the palate, but a little mouthfeel, a… Read more
Golden Yellow