Language is a wonderful thing, capable of expressing so many sentiments, alive with nuance, and so essential to pretty much every element of human life we’d be lost without it. And, as four letter words go, “sure” is one suited to many an occasion.

“It’s positive and affirmative,” is how John Cope-Williams, the man behind SURE Brewing, puts it.

“It sits somewhere between being super-confident and whimsical. It’s just a positive term, and symbolic for us of drinking good beer with mates.”

Add in “simple, snappy and friendly” – terms offered up by his partner-in-crime Steve Matthews – and you can see why the mates who met through the beer industry and bonded over both beer and music landed upon it as they set off in tandem to create their own slice of the beer industry, one that celebrates, well, beer and music.

In launching their first two beers in March 2022, they became approximately the 14,000th brewing company in Australia – an exaggeration, maybe, but you catch my drift – yet they’re far from wet behind the ears. Both have spent their lives in and around beer, doing so long before they met while performing different roles for Bridge Road Brewers.

John cites a trip to Amsterdam in his late 20s as the genesis of his career in beer. Sat in a bar, he ordered an Orval “because the bottle looked cool”, only to be taken aback when the bartender asked what vintage he’d like. Mind blown after one sip, he proceeded to work his way through as many vintages as he could afford, and the seed was sown.

It flourished into full bloom once he was living in Melbourne. In the late Noughties, the Australian craft beer scene was starting to bubble again after previous waves had fallen flat, yet it remained very much the dictionary definition of “nascent”. And John – or JCW as he’s known to many – became one of the figures helping it on his way.

He took up the reins at Cookie in Melbourne’s CBD, turning what was already one of the city’s best bar-slash-restaurants into one of the country’s trailblazing beer venues. Lines were split to allow for more beers to be poured, and pouring through them came all manner of quality local and international offerings. At the same time, the fridges and beer cellar started to take on some sort of resemblance to those he’d have peered into in Amsterdam.

Around the same time, in 2007, he started importing some of New Zealand’s finest beers under the Better Beer Imports banner. He started with Emerson’s, whose Pilsner quickly accrued something of a cult classic status among craft beer’s earlier adopters, before adding the likes of Epic and 8 Wired. He also played a role in some of the city’s earliest beer dinners, working with Rob and Bronwyn Kaboord, who you can read about here, on events that were ahead of their time.

For Steve, his roots – in life as well as beer – can also be traced to Europe, more specifically England, where his first job in beer was running a real ale cellar, where breweries such as Phoenix, Roosters and Salopian whetted his whistle for what lay ahead. A period spent brewing in Wellington followed before he landed the role of brewer at Bridge Road. At the time, John was selling the Beechworth brewery’s beers as the sole Aussie brand in his Better Beer portfolio, and a friendship was forged.

It’s one that outlasted their time with Bridge Road too. Steve later took on the head brewer’s role at Hargreaves Hill before joining Golden Hills, where he's still head brewer at time of writing. John continued to evolved his stable of Kiwi brewers and the pair stayed in touch, catching up regularly for beers – always with a keen ear on the soundtrack.

But given Steve has his full-time brewing gig and John had swapped moved to the Gold Coast during one of Melbourne’s many lockdowns, you might wonder how they came together for SURE.

It turns out John had been formulating the concept for a brewing company for some time. He initially intending it to launch under the Better Beer banner he’d used for 15 years before a lo carb beer devised by an entrepreneur, a pair of Insta comedians and an ASX-listed investment fund decided to claim it for themselves. Steve was one of the brewers he had in mind when things started to take shape when, during Melbourne’s last – crosses fingers – lockdown in November 2021, his phone rang and it was his mate calling for a catch-up.

“It was like, ‘This is meant to be’,” John says. “We’re very much on the same page in terms of what we enjoy drinking, and what we see SURE as: community-based, complete honesty – not pretending to be something you’re not.”

As such, they’re open about the fact they’re operating without a brewery; their first batches were designed by the pair then brewed by Steve and the team at Burnley’s production facility in Victoria. And when it comes to the beers bearing the SURE name, there’s a pretty simple guiding ethos: it’s the beers they want to drink.

If you’ve spent time at bars, beer events or music festivals with John, you’ll know that – 8 Wired’s Cucumber Hippy Berliner aside – there’s a good chance a can of the freshest IPA in his portfolio will be in his hands. Equally, the pair had long bonded over a love of NZ pilsners like the aforementioned classic from Emerson’s.

So it would have come as little surprise to those who know them that SURE debuted with 100% Dynamight – a no-holds-barred IPA, and TRUE, a lager laden with NZ hops. Following those two came 200% Dynamight, a beer whose style we’re pretty sure you can work out for yourselves, and a refreshing fruit sour.

“It’ll probably be 90 percent IPAs,” John says with a laugh when asked about their likely lineup. “But so be it!”

While we’re pretty sure they’d love to find some way of packaging cases of SURE IPAs with 12-inch dub cuts, when it comes to sharing their love of music through beer, they’ve opted for another, rather easier, method.

Each release comes with its own Spotify playlist, accessed via a QR code on the can. For 100% Dynamight, if the label’s sound system artwork wasn’t enough of a giveaway, opening the SURE Sound System playlist reveals reggae and rocksteady tracks from the likes of Toots & The Maytals and Desmond Dekker alongside bona fide good times classics including Uptown Top Ranking and Rudy A Message To You.

With TRUE, they take you on a journey that features the Spandau Ballet track of the same name amid a kaleidoscopic lineup including the Beastie Boys, Labi Siffre and more before ending with a French pianist’s gentle take on the Pixies Where Is My Mind.

Now, if you know the team at The Crafty Pint, you’ll be aware this is the sort of twin-pronged attack designed to have us weak at the knees. But it’s also a genuine reflection of two of the most genuine people in the business, with flavoursome beers finishing as dry as Steve’s sense of humour and a vibe as sunny and welcoming as John’s wide smile and bear hug embrace. 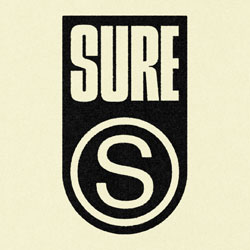 No brewery or venue to visit as yet 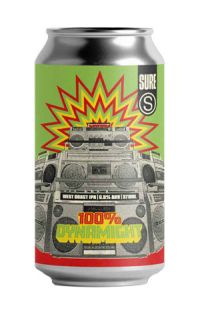 SURE was born out of a desire to brew the styles the brewing company’s founders loved to drink, and like almost anyone who's been in the beer industry for the past decade and more, John Cope-Williams and Steven Matthews love West Coast IPAs. 100% Dynamight is a celebration of what the pair most enjoy in such beers: the lean backdrop of malt, the aromatics that leap from the glass, and the bitter finish holding things together. The beer uses Citra, Chinook and Strata to attain those hop aromatics,… Read more
Golden When you’ve spent years bringing beer from New Zealand to Australia, it’s safe to say you know a thing or two about making lagers with Kiwi hops. That’s certainly the case for John Cope-Williams, who launched SURE Brewing with Steven Matthews early in 2022 as a means of showcasing the sort of beers they love. So it’s fitting that one half of the opening lineup – the other a West Coast IPA – would be TRUE, an NZ lager. It may be a beer inspired by John’s many journey’s across The Ditch,… Read more
Golden Yellow