Watching the evolution of the Hottest 100 Aussie Craft Beers poll is one way of monitoring just how fast the local beer world – and interest in it – is growing. This year, evidence was there not just in the number of votes more than doubling but in the interest there was in covering it; on top of the usual buzz around the beer blogger world, not one but two podcasts broadcast live on the day.

We've already featured one of those two, Radio Brews News – the longest-running Aussie beer podcast, in our Podcast People series. Now it's time for the other.

It's called Inebriation Nation and here – in advance of their next LIVE show tomorrow evening (June 19, 2015) – are the men behind it to tell you who, what and why.

Who are the voices behind Inebriation Nation?

Our show is a collaborative effort so there are many voices, but you will always be able to catch Pies Josh (above left), Sean The Unhealthy Irishman (centre), and Drunk Kevin (right) rambling on about good beer, the beer industry, home brewing or whatever strikes our fancy. An occasional call-in from The Miserable Bastard (pictured below) rounds out the main cast.

The genesis of this show is a long and sordid story involving The Miserable Bastard, Sean, and a swift boot out the door of an unnamed Sydney-based community radio station. Without that happening, Inebriation Nation wouldn’t exist, so it’s probably a good thing that they didn’t want us on the air in the first place.

Really, everyone involved in this show has three things in common: a love for good beer, a love for good radio, and a love for the sound of their own voice, so it only made sense that we decided to start a show about all three. It was just a matter of time until other people started listening.

DK says he’s an authority, but the reality is we’re all inquisitors (and Kevin is just an authority on being drunk!). A large part of our show is talking with authoritative people inside the beer industry and asking them questions relevant to their brewing and business experiences, so the moment we start calling ourselves an authority, we don’t really have an interesting show any more.

Generally it’s because we think they make great beer, or are contributing something interesting and unique to the Australian beer community. We usually have conversations over email or at the pub around people we’d like to talk to and go from there. Other guests have approached us and if the story sounds good, we run with it.

We broadcast our shows live and record everything “live to tape” so there is a tremendous amount of preparation in regards to logistics and scheduling. Once we press record we have an outline of what we want to cover, but we try to keep the flow of the show spontaneous.

In the early days it wasn’t live and was less structured. Primarily because it was new and we needed to feel what worked and what didn't. These days the show tends to follow a more standard format that makes the live aspect easier to accommodate.

We pride ourselves on podcasting live and being able to take live phone calls. Live shows can be unpredictable but that just adds to the excitement of it all. It’s all about being prepared for anything on a live show. 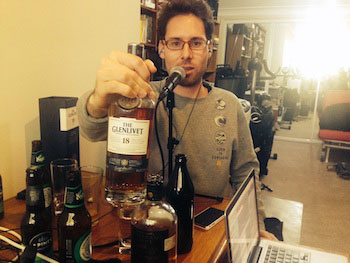 We’re pretty sure we tried to get Ross from Bacchus Brewing give us the scoop on any brothels located near their tasting room. You know, for a friend.

Steve "Hendo" Henderson from BrewCult telling us the story about how he came to have a year’s supply of Evian water, and the inventive things he did to get rid of it all.

This question went round the traps between us all for some time, so we just compiled a list of our favourite guests thus far: Dave Padden (ex Riverside, now Akasha), the boys from Shenanigans, the boys from Batch, Chris Cuzme, Dave Phillips from Dave’s Brewery Tours, and the ladies from Two Birds.

Same deal: Jean van Roy from Cantillon, Charlie Papazian author of “The Complete Joy of Homebrewing”, Ric Flair, and if we could go back in time, Michael Jackson. No, not the singer.

It would hardly be a podcast about good beer if we drank sparkling water on the show now, would it?

The general rule of thumb is that if our guest makes beer, we’re drinking their product. Otherwise we tend to grab whatever is available locally, or some homebrew, or, on the rare occasion we’re given beer to try for the show, that.

Our technical setup has evolved significantly over time. It began with a single Zoom H2 portable recorder with a built-in unidirectional microphone. It has evolved into a much more complex setup.

We currently use two MacBook Pros, two Xenyx 1204USB mixers configured to allow for up to five in-studio voices, a live feed from our telephone line (02-8006-BEER) and Skype, as well as a line in for beds and breaks. All of that gear is supported with a smattering of Shure SM58s, Aldi mics, an atrociously terrible headphones amplifier, iTunes, Audacity and GarageBand channeled into an upstream for our live show.

It’s a hodgepodge of technology built from paycheck to paycheck (we all still have day jobs), or from the occasional generous donation, but we’re slowly building a decent home studio. We’re hoping to add a gate/compressor/limiter as well as a better headphones amplifier soon.

Where can people find the Inebriation Nation podcast?

The best place to check out all of our shows and RSS feed is on our website: inebriation-nation.com.

Information about new show releases is best found on our twitter feed: @inebriatenation

All of our shows are also on iTunes and run on the Sadly Lacking network at sadlylacking.com.

As mentioned, we are all huge fans of radio. In terms of beer, we take a lot of inspiration from The Brewing Network. Those guys are legends.

As for non-beer podcasts, we’ve got a huge list: anything on the Sadly Lacking network; Bats and Balls podcast, The Right Time with Bomani Jones; Desert Island Discs; The Naked Scientists; This American Life; No Agenda; Radiotonic; All The Best; Invisibilia; HowSound; and, last but not least, Home of the Brave. Scott Carrier is a radio genius.

On a side note, for anyone out there more interested in the production side of podcasting, we recommend Transom.org as an amazing, free resource for learning about radio. The “Tools” section of their website has great information about recording techniques, product reviews and more. Jeff Towne is a champ.

Inebriation Nation's next show is broadcasting live this Friday evening (June 19, 2015) from 7pm AEDT. You can catch them LIVE at that time via http://inebriation-nation.com/live-broadcasts or from the Mixlr app available on iTunes and the Google Play store. If there's a beer trend taking off, there's a good chance Brisbane's Bacchus Brewing will be one of the first on board. One that's passed the envelope-pushers by is cans; until now, with the brewery making the switch this November. read on