For a few years now, Victoria's breweries and beer venues have been served by Aussie Brewery Tours, which takes guests on a variety of guided tours around the city and state's best spots for a beer. As the craft beer scene continues to grow, the number of tour operators is on the rise too.

Melbourne Brewery Tours recently advertised for a beer lover to join its team, while Ben's Brew Tours started up a few weeks ago. Kerry McBride joined the last of these on a recent jaunt around Melbourne's north to find out just what they're offering.

Good Beer Week has been the scene of the crime for many a crazy tale or idea, and it seems that the latest brew tour company in Melbourne has the festival’s opening gala to thank for its existence.

Ben’s Brew Tours has been up and running for just a few months, taking craft beer newbies around some of the northern suburb’s best venues, including Carwyn Cellars, Forester’s Hall and behind-the-scenes tours at an eclectic mix of breweries.

While tasting a few beverages at this year’s GBW gala showcase in March, co-founder Ben O’Brien-Limmer (below right) found himself relishing the chance to speak with the people behind the brews. That provided the kernel of an idea which he began to develop over the next month with his wife Natasha (below left). 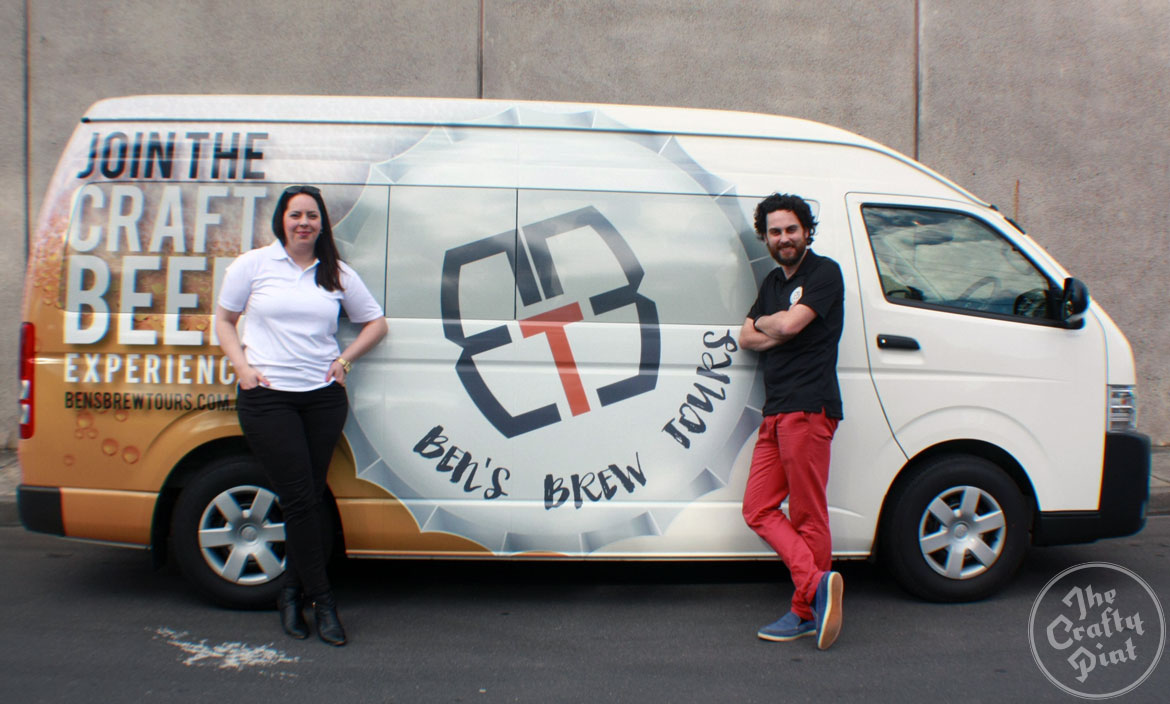 “I’d been mulling things over for quite a while and would always have these crazy, harebrained ideas," he says. "I’d tell Natasha them and she’d wait for them to slowly die off.

“But this time at the gala showcase, I just loved that I could talk to the boys. I could meet the people, and drink their beer at the same time… The next afternoon I came out and said, ‘Tash, I think I’ve got an idea I really want to make happen’.”

The pair started off by approaching Hawkers Beer co-founder Mazen Hajjar, who had shown a keen interest in the concept at the showcase. His Reservoir brewery serves as a base point for both tours currently on offer – Brew to Bottle and Northern Stars.

For Mazen and Hawkers co-founder Joseph Abboud (the chef behind Rumi and Moor’s Head), a brew tour offered the chance to tell their rather unique story of how the Middle East’s first craft brewery ended up in the north of Melbourne to people every weekend.

“It is so important because craft beer is not just about the product, it’s about the story,” says Mazen (below left with Joseph). 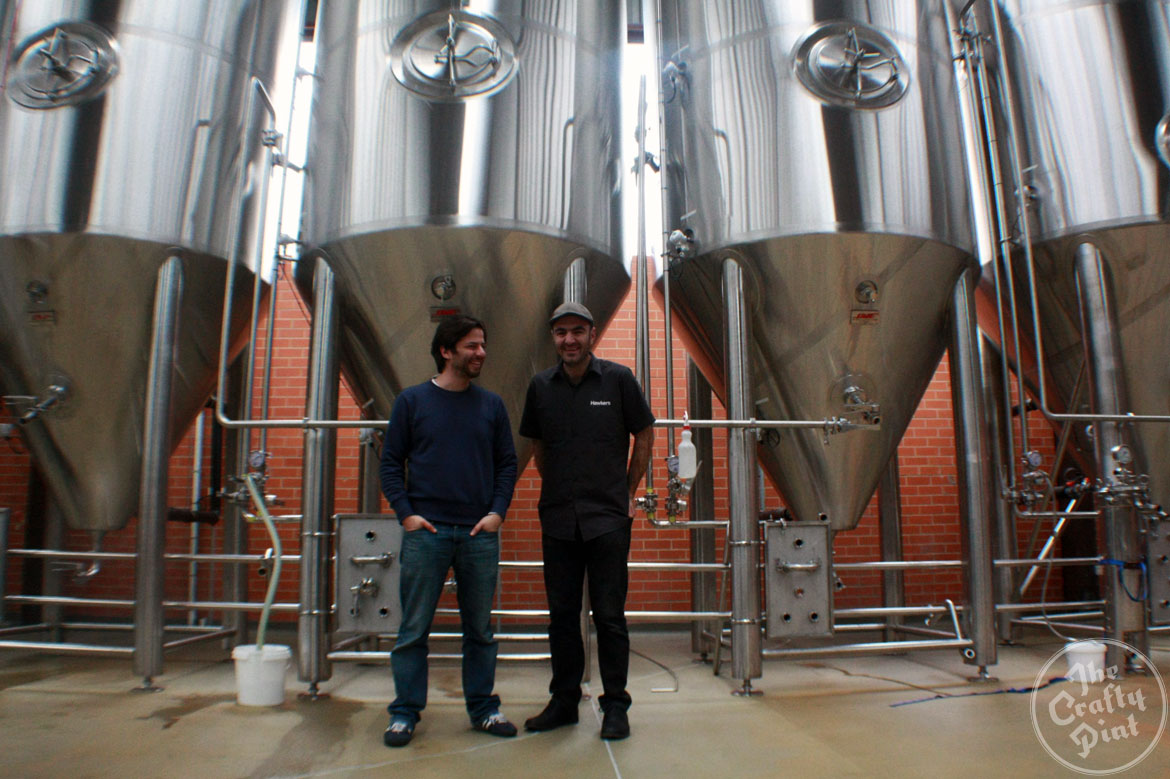 “Every brewery has its own special, unique story. We are in the business of selling beer, but also storytelling. The more we get in peoples’ faces and tell our story, the more people understand what we are trying to do.”

That focus on storytelling, and helping people new to the scene understand the community of Melbourne craft beer is the driving force behind the fledgling tour company, Ben says.

“We’re at that point in the Melbourne market where it’s getting to the point that it needs to push onto that next level.

“People are starting to get interested in craft beer, however still get a little bit daunted when they walk into a bar and see anywhere from ten to 32 taps and have no idea what they’re looking at. They have no idea what IPA stands for, they know nothing.

“So they go to what’s familiar. I find that a real shame, because there are so many amazing beers out there that people would love if they just got introduced to them.”

While Ben’s day job involves teaching performing arts to children, who he says are “not the best customers” for a beer tour, Natasha’s marketing experience has proved invaluable in getting the tours out to market.

“What Ben is really good at doing is bringing it down to anybody’s level, depending on where people are at on their craft beer journey,” Natasha says.

“Social media is a great tactic to push it, but it’s all about collaboration for us too, because we really care about the local brewers and we want people to see their passion. There’s so much out there that you can only take a little step at a time, but a tour like this is a great way to do that.”

With more and more brew tours coming onto the market, Ben says their point of difference is in opening up the northern and inner suburbs to people and helping them find a place they can make a regular watering hole.

“There are tours already going out to Mornington and Yarra Valley, and doing a great job of that. I saw an area that I could add value. I could make it my own, and help people discover an aspect that has been largely undiscovered,” he says.

“It seemed a bit of a no brainer to me. There’s Hawkers, there’s 3 Ravens, we’d become good friends with the guys at Carwyn Cellars. It was just the thought that people need to see these places, they need to know that they’re here.”

While they still juggle their day jobs with weekend brew tours, Ben and Natasha are busy laying the groundwork for a tour based on the Number 86 tram, and have their eye on the inner southeast thanks to the number of breweries opening up in the south.

“In the future I might do a bit more in that area, but there’s so much to be done just in Melbourne itself," he says. "We want to introduce people to somewhere they can go back to.”

Ben Duval from Carwyn was approached by the O’Brien-Limmers early on. The Thornbury bar has a steady stream of Thornbury locals and beer geeks from across Melbourne coming through its doors, but brew tours offer a chance to welcome some new faces.

“It’s good from an educational perspective. We can speak to Ben through the week about what we’re going to have on tap. 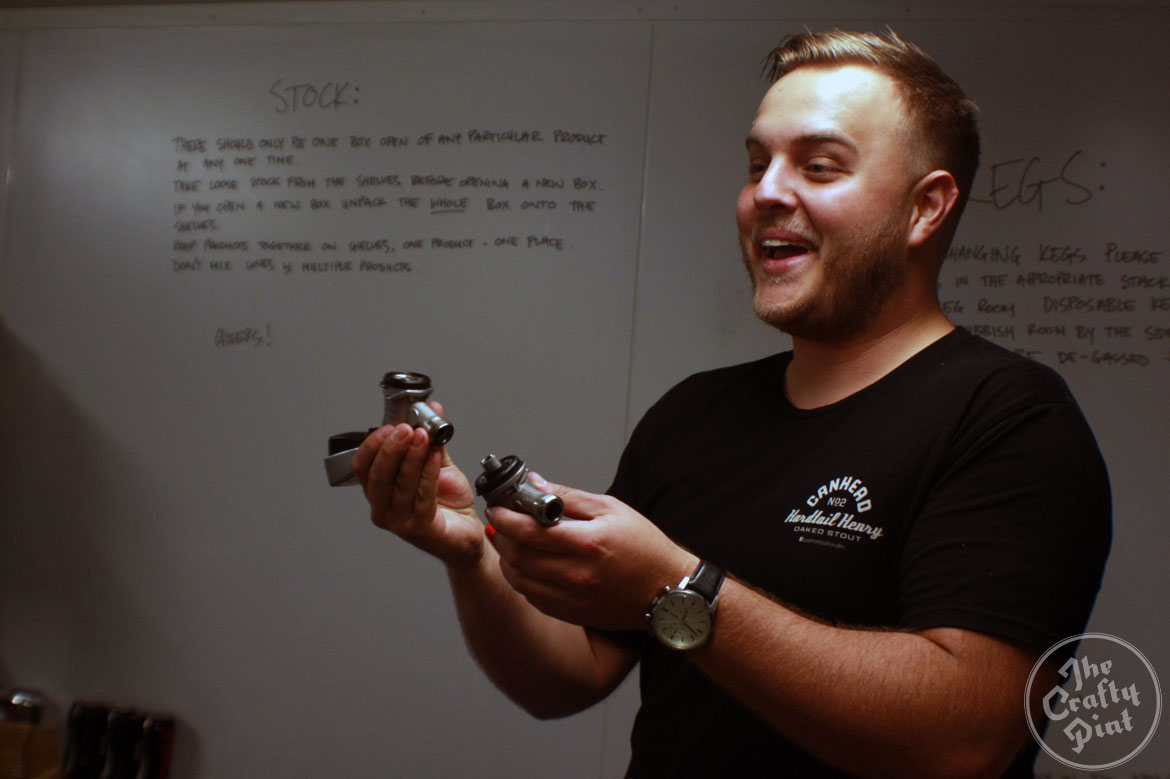 “We can plan how to showcase different styles, talk a bit about the history of it, and show people a completely different side of the industry.”

That opportunity to educate is one also welcomed by Forester’s Hall venue manager Dan Johnston (pictured above), who tends to get the brew tour at the seven hour mark. With a captive audience, he makes the most of the chance to take them through the Forester’s selection, and show off their impressive cool room system.

“Having Ben bring in ten faces that aren’t normally our clientele really gives us that intimate opportunity to show off why we do what we do," says Dan.

“Just getting more people exposed to good beer is what our mentality is. We’ve got beers for the more junior palate, and beers for the more advanced palate. It’s introducing people to new beers that aren’t the ones they’ve been drinking since they were sixteen.”

Both Ben and Dan from Forester’s are agreed that craft beer can be an intimidating concept for someone just starting to dip their toes in the water, but if the introduction is done right then magical things can happen.

“It only takes one little moment for people to realise what this world is all about and I think it hook, line and sinker drags you in,” says Dan.

Both tours currently on offer are $165, and include lunch at Terminus Hotel, free tastings, beers from participating breweries, and a branded CRAFTD. glass to take home.

Kerry McBride is a reformed journalist who has taken the well-trodden path from Wellington to Melbourne. Her love for bad puns is matched only by her love of hoppy beers and Hallertau Funkonnay. She was invited on the tour as a guest of Ben's Brew Tours.

Check out Nick O's write up from his tour around Sydney's breweries with Dave's Brewery Tours here. Once better known for its wines, the Adelaide Hills have become a treasure trove for beer lovers. Here, Matt King takes a meandering tour through the many breweries, venues and bottleshops that are found throughout. read on